The Race to Space: Countdown to Liftoff (Epic Fails #2) (Paperback) 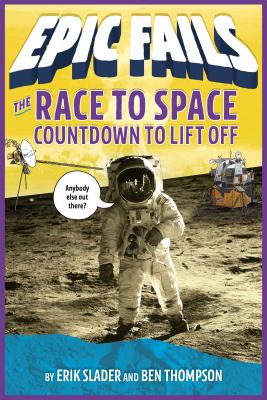 This is book number 2 in the Epic Fails series.

In this second installment of the Epic Fails series, explore the many failures that made up the Race to Space, paving the way for humanity’s eventual success at reaching the stars.

Today, everyone is familiar with Neil Armstrong’s famous words as he first set foot on the moon: “one small step for man; one giant leap for mankind.” He made it look easy, but America’s journey to the moon was anything but simple. In 1957, when the Soviet Union launched Sputnik, the world’s first satellite, into orbit, America had barely crossed the starting line of the great Space Race. Later that year, our first attempt was such a failure that the media nicknamed it “Kaputnik.” Still, we didn’t give up. With each failure, we gleaned valuable information about what went wrong, and how to avoid it in the future. So we tried again. And again. And each time we failed, we failed a little bit better.

The Epic Fails series by Erik Slader and Ben Thompson explores the humorous backstories behind a variety of historical discoveries, voyages, experiments, and innovations that didn't go as expected but succeeded nonetheless, showing that many of mankind's biggest success stories are the result of some pretty epic failures indeed.