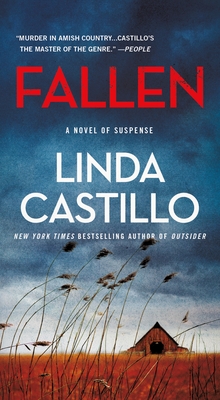 This is book number 13 in the Kate Burkholder series.

In New York Times bestselling author Linda Castillo’s next thriller Fallen, a rebellious Amish woman leaves the Plain life, but the secrets she takes with her will lead Chief of Police Kate Burkholder down a dark path to danger and death.

When a young woman is found murdered in a Painters Mill motel, Chief of Police Kate Burkholder is shocked to discover she once knew the victim. Rachael Schwartz was a charming but troubled Amish girl who left the fold years ago and fled Painters Mill. Why was she back in town? And who would kill her so brutally?

Kate remembers Rachael as the only girl who was as bad at being Amish as Kate was—and those parallels dog her. But the more Kate learns about Rachael's life, the more she's convinced that her dubious reputation was deserved. As a child, Rachael was a rowdy rulebreaker whose decision to leave devastated her parents and best friend. As an adult, she was charismatic and beautiful, a rabble-rouser with a keen eye for opportunity no matter who got in her way. Her no-holds-barred lifestyle earned her a lot of love and enemies aplenty—both English and Amish.

As the case heats to a fever pitch and long-buried secrets resurface, a killer haunts Painters Mill. Someone doesn’t want Rachael’s past—or the mysteries she took with her to the grave—coming to light. As Kate digs deeper, violence strikes again, this time hitting close to home. Will Kate uncover the truth and bring a murderer to justice? Or will a killer bent on protecting a terrible past stop her once and for all—and let the fallen be forgotten?

“Exhilarating...Castillo adds surprising twists to the gripping plot and touches upon police brutality and Amish discrimination. This sterling entry can be easily read as a standalone.” –Publishers Weekly (starred)

“An absolute cracker of a book.” –Booklist (starred)

“Castillo uses her Ohio background and knowledge to superb effect. She conceives and creates fully fleshed characters, devises an intricate and twisty plot and examines complex issues of religion and morality. A series of literary weight, Castillo’s work appeals to connoisseurs of crime fiction who expect powerful purpose as well as serious storytelling.” –Fredericksburg Free-Lance Star

“Castillo is terrific at constructing a story, and her pacing is impeccable…this series just gets better and better; Fallen may be the best entry yet.” –St. Louis Post Dispatch

“Fallen successfully pushes the envelope of the series…Castillo is more than capable of extracting new stories from a deceptively but deeply complex culture that is as intricate as it is misunderstood.” –Bookreporter.com