Not That I Could Tell: A Novel (Paperback) 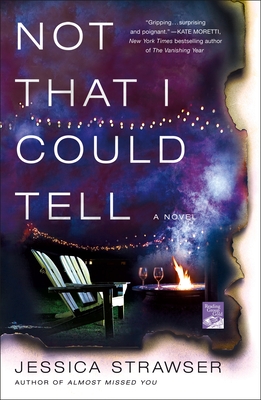 By Jessica Strawser
$16.99
In Our Warehouse - Expected arrival in 2-5 days

*Book of the Month Club Selection

An innocent night of fun takes a shocking turn in Not That I Could Tell, the next page-turner from Jessica Strawser, author of Almost Missed You.

When a group of neighborhood women gathers, wine in hand, around a fire pit where their backyards meet one Saturday night, most of them are just ecstatic to have discovered that their baby monitors reach that far. It’s a rare kid-free night, and they’re giddy with it. They drink too much, and the conversation turns personal.

By Monday morning, one of them is gone.

Everyone knows something about everyone else in the quirky small Ohio town of Yellow Springs, but no one can make sense of the disappearance. Kristin was a sociable twin mom, college administrator, and doctor’s wife who didn’t seem all that bothered by her impending divorce—and the investigation turns up more questions than answers, with her husband, Paul, at the center. For her closest neighbor, Clara, the incident triggers memories she thought she’d put behind her—and when she’s unable to extract herself from the widening circle of scrutiny, her own suspicions quickly grow. But the neighborhood’s newest addition, Izzy, is determined not to jump to any conclusions—especially since she’s dealing with a crisis of her own.

As the police investigation goes from a media circus to a cold case, the neighbors are forced to reexamine what’s going on behind their own closed doors—and to ask how well anyone really knows anyone else.

Jessica Strawser is editor-at-large at Writer’s Digest, where she served as editorial director for nearly a decade and became known for her in-depth cover interviews with literary luminaries. She’s the author of the book club favorites Almost Missed You and Not That I Could Tell, a Book of the Month selection and Barnes & Noble Best New Fiction pick for March 2018 (both St. Martin’s Press).

She has written for The New York Times Modern Love column, Publishers Weekly, and other fine venues, and is a popular speaker at writing conferences and book festivals. She lives with her husband and two children in Cincinnati.

“Not That I Could Tell is a psychological thriller of the highest order, as well written as it is structured. That means the magazine Strawser once edited might well be covering her from the other side, and deservedly so.”—Providence Journal

“Surprising and entertaining, Not That I Could Tell is a riveting story of secrets and suburbia.” —Buzzfeed, “5 Suspenseful Thrillers for Fans of Ruth Ware”

"In Not That I Could Tell, Strawser tackles the secrets of suburbia, domestic abuse, and friendship in a gripping story about a neighboring family gone missing. The characters are unique, engaging, and relatable and the ending is both surprising and poignant. Fans of Liane Moriarty will adore Jessica Strawser; she’s a huge talent!" —Kate Moretti, New York Times bestselling author of THE BLACKBIRD SEASON

"Strawser has wrapped a mystery into the fabric of a tightly knit community...Well-drawn characters, a perfectly cast neighborhood and a great puzzle; what more could you want in your next read?" —Catherine McKenzie, bestselling author of Fractured and The Good Liar

"As the lies build and secrets unravel, you’ll probably stay up too late to finish the book as it speeds toward an edge-of-your-seat conclusion. Ultimately a story about the power of instincts and the strength of women, Not That I Could Tell is full of satisfying suspense and one to add to your “must-read” list!" — Karma Brown, international bestselling author of Come Away With Me and In This Moment