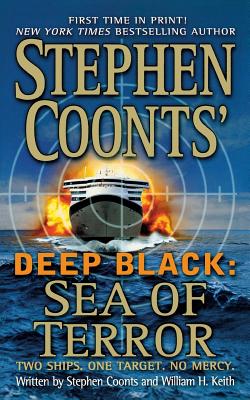 By Stephen Coonts, William H. Keith
$23.99
In Our Warehouse - Expected arrival in 2-5 days

This is book number 8 in the Deep Black series.

Two massive ships are on a dual path to destruction. One is a freighter carrying nuclear materials to Japan; the other, a cruise ship heading for the Mediterranean. Neither will reach their destinations. Two factions-Japanese eco-terrorists and Middle East extremists-have joined forces to infiltrate the ships, incapacitate the crew, and change course toward a common target:
The United States of America.

In Washington, Charlie Dean and a team of commandos are dispatched on a life-or-death mission to blow the hijackers' plot out of the water. Their plan: board the ship unnoticed, pose as ordinary passengers, and overtake the terrorists. But time is running out. The seized ships are crossing the Atlantic with the combined strength of a full-scale nuclear torpedo. And New York City is just on the horizon....in Stephen Coonts' Deep Black: Sea of Terror, cowritten with William H. Keith.

Stephen Coonts is the author of The Disciple, The Assassin, and the Deep Black and Saucers series, among many other bestsellers. His first novel, the classic flying tale Flight of the Intruder, spent more than six months at the top of The New York Times bestseller list. A motion picture based on the book was released in 1991. His novels have been published around the world and translated into more than a dozen languages. In 1986, he was honored by the U.S. Naval Institute with its Author of the Year Award. He is also the editor of several anthologies, Combat, On Glorious Wings, Victory and War in the Air. Coonts served in the Navy from 1969 to 1977, including two combat cruises on the USS Enterprise during the last years of the Vietnam War.

William H. Keith has written nearly eighty books over the past twenty-five years, including the Warstrider series. His novels, published under the pseudonyms Ian Douglas and H. Jay Riker, are geopolitical thrillers with an emphasis on the Marines and submarine warfare. A veteran of the Navy, he lives in western Pennsylvania.