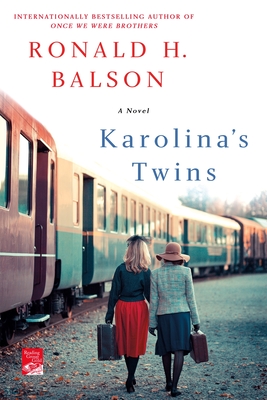 By Ronald H. Balson
Email or call for price.
Backordered

In the tradition of The Nightingale, Sarah's Key, and Lilac Girls, comes a saga inspired by true events of a Holocaust survivor’s quest to return to Poland and fulfill a promise, from Ronald H. Balson, author of the international bestseller Once We Were Brothers.

~~
“Readers who crave more books like Balson’s Once We Were Brothers and Kristin Hannah’s bestselling The Nightingale will be enthralled by Karolina’s Twins.” —Booklist (starred review)

Lena Woodward, elegant and poised, has lived a comfortable life among Chicago Society since she immigrated to the US and began a new life at the end of World War II. But now something has resurfaced that Lena cannot ignore: an unfulfilled promise she made long ago that can no longer stay buried.

Driven to renew the quest that still keeps her awake at night, Lena enlists the help of lawyer Catherine Lockhart and private investigator Liam Taggart. Behind Lena’s stoic facade are memories that will no longer be contained. She begins to recount a tale, harkening back to her harrowing past in Nazi-occupied Poland, of the bond she shared with her childhood friend Karolina. Karolina was vivacious and beautiful, athletic and charismatic, and Lena has cherished the memory of their friendship her whole life. But there is something about the story that is unfinished, questions that must be answered about what is true and what is not, and what Lena is willing to risk to uncover the past. Has the real story been hidden these many years? And if so, why?

Two girls, coming of age in a dangerous time, bearers of secrets that only they could share.

Just when you think there could not be anything new to ferret out from World War II comes Karolina's Twins, a spellbinding new novel by the bestselling author of Once We Were Brothers and Saving Sophie. In this richly woven tale of love, survival and resilience during some of the darkest hours, the unbreakable bond between girlhood friends will have consequences into the future and beyond.

RONALD H. BALSON is an attorney, professor, and writer. His novel The Girl From Berlin won the National Jewish Book Award and was the Illinois Reading Council's adult fiction selection for their Illinois Reads program. He is also the author of Eli’s Promise, Karolina's Twins, The Trust, Saving Sophie, and the international bestseller Once We Were Brothers. He has appeared on many television and radio programs and has lectured nationally and internationally on his writing. He lives in Chicago.

“Readers who crave more books like Balson’s Once We Were Brothers (2013) and Kristin Hannah’s bestselling The Nightingale (2015) will be enthralled by Karolina’s Twins.” —Booklist (starred review)

"Karolina's Twins is involving right from the start, it reads quickly, and fans of historical fiction are sure to enjoy it." —Chicago Jewish Star

“A heartbreaking tale of a mother’s love, friendship, and family in the face of increasingly brutal conditions and the constant threat of imminent death in Nazi-occupied Poland…reminiscent of the author’s first novel Once We Were Brothers…compelling.” —Library Journal

“The third in Balson’s promising series about a husband-and-wife investigation team specializing in Holocaust cases. [Lena Woodward’s] survivor account becomes the main source of suspense, since she is reluctant to reveal the full horror of what she experienced until the end…and [it] does not disappoint.” —Kirkus

"Balson kept me on the edge of my seat wondering what the next chapter would reveal. He did an excellent job in staying true to the historical facts of those years of the Holocaust and what Lena, the main character and survivor, had to go through. Balson keeps the suspense so riveting that it was difficult to put the book down. I would say most will read it in one night sitting—kudos to Ronald Balson." —Dr. Miriam Klein Kassenoff, Director of the University of Miami Holocaust Teacher Institute

"A novel of survival, justice and redemption...riveting." —Chicago Tribune, on Once We Were Brothers