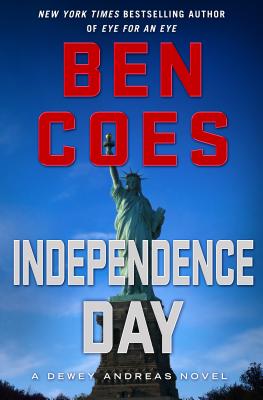 By Ben Coes
Email or call for price.
Not Available at This Time

This is book number 5 in the A Dewey Andreas Novel series.

Dewey Andreas is back...and the clock is ticking!

Cloud, a high-level Russian hacker, perhaps the best in the world, has acquired a nuclear weapon. It's an older bomb from the USSR's Cold War arsenal with the power to devastate a major city. Fueled by a dark and personal vendetta, Cloud has put it onto an anonymous trawler, piloted by jihadists, headed straight to America.

Dewey Andreas, former Delta working as an agent for the C.I.A., is still drowning in grief after the tragic murder of his fiancée. Dewey has lost his focus, his edge, and the confidence of his superiors.

Learning of the missing loose nuke and picking up chatter about an impending terrorist attack on American shores, the best and most talented C.I.A. agents are now chasing both Cloud and the bomb. Acting on credible intel, two highly trained teams are sent into Russia in a two-pronged mission to grab Cloud. But it's a trap, and now America's last hope of stopping the bomb is an unofficial agent gone rogue-Dewey Andreas.

With only three days left, Dewey Andreas must find the elusive Cloud. To do so, Dewey will risk everything to find the most dangerous and skilled enemy he's yet faced. For if he fails, American will suffer its most deadly terrorist attack on the Fourth of July-Independence Day.

“Explosive from beginning to end and one of those rare titles that is so much fun that you wish it would never end... INDEPENDENCE DAY may well be the best installment of the series to date. I don't think I'll celebrate another Fourth of July without thinking of it. There's enough action, explosions, fatalities and (best of all) intelligence nuggets to fill a summer's equivalent of books... Strongly recommended, from first page to last.” —Bookreporter

“Coes is in the same league as Brad Thor and Vince Flynn, and this high-octane race against time will have plot-driven thriller readers unable to turn the pages fast enough.” —Booklist (starred review) on Independence Day

“Compelling characters, a wealth of technical detail, and ticking-clock suspense make [INDEPENDENCE DAY] one of the year's best thrillers... Last-minute twists ratchet up the tension as the book races to the final confrontation.” —Publishers Weekly (starred review)

“Ben Coes has created a hero who ranks with the protagonists in a Vince Flynn or Brad Thor thriller . . . The Last Refuge is a winner and will keep readers turning the pages.” —The Associated Press

“My favorite novel in at least a decade. The writing was inherently masculine, brilliantly crafted.” —Huffington Post on Eye for an Eye