Under the Knife: A Novel (Hardcover) 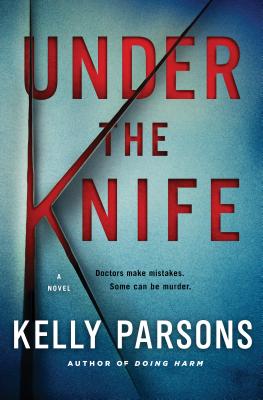 By Kelly Parsons
Email or call for price.
Not Available at This Time

Biotechnology tycoon Morgan Finney is highly intelligent but shy and emotionally fragile. When his beloved wife Jenny dies of complications during a surgery led by Dr. Rita Wu, Finney’s grief turns to rage. He vows to kill Rita just as he believes she killed his wife.

But first he will systematically destroy her life. He will take what is precious to her just as she did to him. Aided by a mysterious man, Finney uses advanced medical technology to ruin Rita’s reputation and bring her to the brink of madness. Alone, fighting for her sanity and life, Rita reaches out to her to former lover, Dr. Spencer Cameron, for help. Together they must fight to uncover Finney’s horrific intentions and race to stop him before it’s too late.

Terrifying and captivating, Kelly Parsons's Under the Knife is a heart pounding thriller that will have readers on the edge of their seats up to the very last page.

KELLY PARSONS is a board-certified urologist with degrees from Stanford University, University of Pennsylvania, and Johns Hopkins, and he is on the faculty at the University of California San Diego.  He lives with his family in Southern California.  Doing Harm is his first novel.


“This spectacular debut is a real nail-biter with startling revelations that build suspense throughout.” —RT Book Reviews

“A twist worthy of a surgical knot. Flawed characters standing on moral pedestals. Insight into the world of medicine and the ambitious geniuses who make life-and-death decisions. Doing Harm is more faction than fiction, presenting a world so close to our own that you find yourself second-guessing the characters as if they're sitting next to you. Repeatedly, I found myself breathless and troubled yet compelled to keep reading. Brilliant.” —Ridley Pearson

“A classic cat-and-mouse game with a refreshing, unexpected twist. It opens with some remarkable bait—dangling a hook that the reader will definitely want to bite. Top notch storytelling.” —Steve Berry