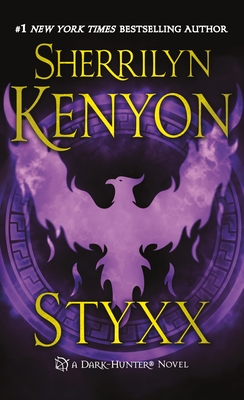 By Sherrilyn Kenyon
$14.99
Email or call for price.

This is book number 17 in the Dark-Hunter Novels series.

As the twin to Acheron, Styxx hasn't always been on his brother's side. They've spent more centuries going at each other's throats than protecting their backs. Now Styxx has a chance to prove his loyalty to his brother—but only if he's willing to trade his life and future for Acheron's.

There are two sides to every story.

And you don't know Styxx…

The Atlantean goddess of Wrath and Misery, Bethany was born to right wrongs. She owes Acheron a debt that she vows to repay, no matter what it takes. He will join their fellow gods in hell and nothing is going to stop her. But things are never what they seem, and Acheron is no longer the last of his line…Meanwhile, Styxx is faced with a desperate decision: To save the world, he can either join forces with the brother who betrayed him or battle the only woman who has held his heart. Which will he choose? The real fight for survival is about to begin…

New York Times bestselling author Sherrilyn Kenyon is a regular in the #1 spot. This extraordinary bestseller continues to top every genre in which she writes, including manga and graphic novels. More than 70 million copies of her books are in print in more than one hundred countries. Her current series include The Dark Hunters®, The League®, Deadman’s Cross™, Chronicles of Nick®, Hellchasers™, Mikro Chasers™, and The Lords of Avalon®. Her Chronicles of Nick® and Dark-Hunter® series are soon to be major motion pictures.

“[A] publishing phenomenon . . . [Sherrilyn Kenyon is] the reigning queen of the wildly successful paranormal scene . . . Just one example of arguably the most in-demand and prolific authors in America these days.” —Publishers Weekly

“Kenyon's writing is brisk, ironic and relentless imaginative. These are not your mother's vampire novels.” —Boston Globe