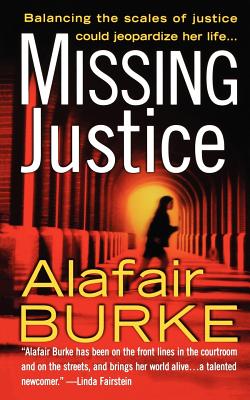 In the second entry in this "sharp, new crime series," the search for a missing judge leads Samantha Kincaid into Portland politics and a labyrinth of crime, corruption, and cover-ups
(Publishers Weekly)

Deputy District Attorney Samantha Kincaid is back at work after an attempt on her life and a promotion into the Major Crimes Unit. When the husband of Portland, Oregon, city judge Clarissa Easterbrook reports her missing and Samantha is called out on the case, she assumes her only job is to make the district attorney look good until the judge turns up. When the police discover evidence of foul play, however, Samantha finds herself unearthing secrets that Clarissa had wanted to stay hidden, the lingering personal tolls of a crime that occurred decades ago. And when those secrets lead to the discovery of corruption at the highest levels of the city's power structure, Samantha realizes that her quest for justice could cost her not only her job but her life.

In the skillfully plotted, highly suspenseful follow-up to her acclaimed debut, Judgment Calls, Alafair Burke once again demonstrates that "she's got what it takes" (Michael Connelly). With its irreverent heroine and seamless blend of squad rooms, street scenes, and courtroom drama, Missing Justice confirms Burke's place among the genre's most talented and exciting newcomers.

A former deputy district attorney in Portland, Oregon, Alafair Burke now teaches criminal law at Hofstra School of Law and lives in Long Island, New York. The daughter of the acclaimed crime writer James Lee Burke, she is the author of the Samantha Kincaid series, including Judgment Calls and Missing Justice.

“The second Kincaid mystery by the daughter of James Lee Burke is a very clever whodunit long on red herrings, shadowy motives, and sly humor. The author's background as a former deputy DA in Portland lends gritty ambience to this modern parable of greed and ambition.” —Booklist

“[Kincaid is] a slightly seasoned, feisty woman who runs impressive distances and confides her endearing foibles to the reader. Burke does a good job of integrating the political and personal lives of her characters, with the detectives of the Major Crimes Unit being particularly well drawn.” —Publishers Weekly

“Samantha Kincaid is one feisty, smart, articulate soul...she is appearing in her second novel in what's proving to be the beginning of a tough, funny, incisive new mystery-procedural series...clear-eyed, sardonic...Burke's first novel, Judgment Calls, was terrific: tight, savvy, ingenious and suspenseful, and this one proves that it was no one-shot deal.” —Providence Journal

“In Missing Justice, Burke really hits her stride. And so does her protagonist...she's smart, she's tough, and she's unafraid-in short, just the way we like our heroines.” —New Orleans Times Picayune

“A taut mystery/thriller with fine characters from an author who debuted with her own voice and a good understanding of how to make a book work...her ADA Kincaid is a solid feature character, bright, flawed, feisty and very much her own woman...it is a fine and fast read.” —Statesmen Journal (Salem, OR)

“Burke is definitely a comer and a keeper.” —Chicago Tribune

“Are you born with great genes for writing fiction? Or is it something you learn at your Daddy's or Mommy's knee? Whatever it is, Alafair Burke, daughter of James Lee, has it...this is a fine, hidden-secret novel...the fun is in the unraveling of the story, and Burke makes the most of that...Kincaid is a great character.” —Toronto Globe and Mail

“Alafair Burke advances the story with ingenuity and a sly, sexy charm. Samantha is autonomous and classy as a woman obsessed with cracking her case. Yet she is never unapproachable. She wins arguments with elan--and the author uses clear explanations of actual law without seeming legalistic.” —Desert Morning News (Salt Lake City)

“Alafair Burke made a promising debut with Judgment Calls...Kincaid returns in another absorbing legal thriller.” —The Seattle Times

“As a former prosecutor herself, Burke knows the inside of a courtroom, and it shows in the details. The most compelling scenes in the book are set in the halls of justice.” —Rocky Mountain News (Denver, CO)

“Extremely talented.... Missing Justice is a finely wrought aggregate of the elements of a police procedural, merged with the architecture of a legal thriller and a tightly plotted 'old-fashioned' mystery.... In this second outing for them, both Burke and Kincaid come off as very talented and justly claiming their place among the work of writers like Linda Fairstein and Jan Burke...she has the gift every writer longs for: to grab the reader's attention on page one and hold on to it until the last page is read.” —Barbara Lipkien Gershenbaum, Bookreporter.com

“Each of her two books can be read as a stand-alone...buy them both. You won't be disappointed.” —Barbara Franchi, Reviewingtheevidence.com