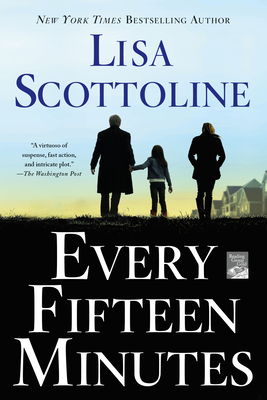 “Have you ever read a book that stayed with you during the day while you were working, going about your daily routine? A book that made you want to turn on the news to see what was happening in the characters' lives - even though you knew that you were just reading a novel? Scottoline's latest, Every Fifteen Minutes, made me do just that! The story of Chief of Psychiatry Eric Parish, his troubled patient, Max, and a murder for which Dr. Parish is suddenly seen as a 'person of interest,' along with other trumped-up charges against him, will not let readers put this book down until the stunning conclusion.”
— Nona Camuel (W), CoffeeTree Books, Morehead, KY

New York Times best selling author Lisa Scottoline's visceral thriller, Every Fifteen Minutes, brings you into the grip of a true sociopath and shows you how, in the quest to survive such ruthlessness, every minute counts.

"Scottoline has plenty of tricks up her sleeve." -Booklist (starred review)

Dr. Eric Parrish is the Chief of the Psychiatric Unit at Havemeyer General Hospital outside of Philadelphia. Recently separated from his wife Alice, he is doing his best as a single Dad to his seven-year-old daughter Hannah. His work seems to be going better than his home life, however. His unit at the hospital has just been named number two in the country and Eric has a devoted staff of doctors and nurses who are as caring as Eric is. But when he takes on a new patient, Eric's entire world begins to crumble. Seventeen-year-old Max has a terminally ill grandmother and is having trouble handling it. That, plus his OCD and violent thoughts about a girl he likes makes Max a high risk patient.

Max can't turn off the mental rituals he needs to perform every fifteen minutes that keep him calm. With the pressure mounting, Max just might reach the breaking point. When the girl is found murdered, Max is nowhere to be found. Worried about Max, Eric goes looking for him and puts himself in danger of being seen as a "person of interest" himself.

Next, one of his own staff turns on him in a trumped up charge of sexual harassment. Is this chaos all random? Or is someone systematically trying to destroy Eric's life?

“A sock-'em stand-alone...The red herrings come fast and furious; part of the fun is how skillfully Scottoline leads us astray.” —People Magazine Pick of the Week

“Bestseller Scottoline casts an unflinching eye on the damaged world of sociopaths in this exciting thriller.” —Publishers Weekly (starred review)

“Scottoline has plenty of tricks up her sleeve.” —Booklist (starred review)

“Scottoline's breezy, irreverant style prevails and her gift for intimacy - for drawing the reader close to sociopath and victim - makes Every Fifteen Minutes as teasingly irresistible as any of this versatile author's creations.” —The Washington Post

“The queen of justice, Lisa Scottoline, has yet again written a tale that will hold readers' attention while leading them to an ultimate 'shock' at the end...Scottoline rocks it yet again!” —Suspense Magazine

“A gripping story of twists.” —Parkersburg News and Sentinel

“Scottoline keeps Every Fifteen Minutes on a fast track as the well-planned twists and turns race toward the surprising, yet believable ending. The clues have been carefully laid throughout, but Scottoline expertly keeps them hidden in plain sight.” —South Florida Sun Sentinel