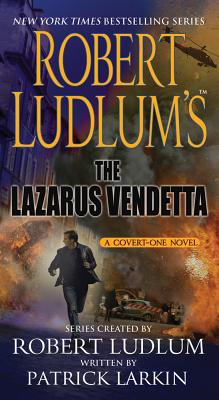 By Robert Ludlum, Patrick Larkin
$9.99
Email or call for price.

This is book number 5 in the Covert-One series.

The #1 bestselling master of suspense and international intrigue continues to set the standard against which all other thrillers are measured with his expertly plotted, pulse-pounding Covert-One series.

The Lazarus Movement, the dominant force in the eco-conscious, "anti-technology" protest movement, has sent rumblings down the halls of the world's intelligence agencies. Led by a mysterious, never-seen figure known only as Lazarus, this increasingly prominent group is believed by some to be preparing a bold strike.

When an attack on a nano-technology research facility leaves thousands dead—protestors and scientists alike—from what appears to be a cloud of inadvertently released but gruesomely deadly nanobots, pandemonium reigns. Lt. Col. Jon Smith is activated by Covert-One to find the truth about Lazarus where all others have failed. As Smith slowly uncovers the deadly underpinnings of the group, he soon learns that the Lazarus Movement is only the very tip of the iceberg in a deadly scheme that threatens billions of lives and will forever change the nature of the world itself.

“Intricately plotted, action-packed...a fast read and sure to delight fans of espionage and the technothriller.” —Booklist