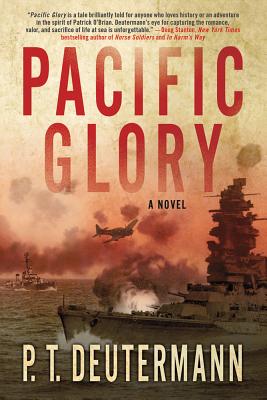 By P. T. Deutermann
Email or call for price.
Not Available at This Time

A thrilling, multi-layered World War II adventure following two men and an unforgettable woman, from Pearl Harbor through the most dramatic air and sea battles of the war

Marsh, Mick, and Tommy were inseparable friends during their naval academy years, each man desperately in love with the beautiful, unattainable Glory Hawthorne. Graduation set them on separate paths into the military, but they were all forever changed during the Pearl Harbor attack on December 7, 1941.

Glory, now Tommy's widow, is a tough Navy nurse still grieving her loss while trying to save lives. Marsh, a surface ship officer, finds himself in the thick of terrifying sea combat from Guadalcanal through Midway to a climactic showdown at Leyte Gulf. And Mick, a hotshot fighter pilot with a drinking problem and a chip on his shoulder, seeks redemption after a series of failures leaves him grounded.

Filled with wide-screen action, romance, and heroism tinged with the brutal reality of war, Pacific Glory is a dynamic new direction for an acclaimed thriller writer.

One of Library Journal's Best Historical Fiction Books of 2011

P. T. DEUTERMANN is the author of many previous novels including Pacific Glory, which won the W. Y. Boyd Literary Award for Excellence in Military Fiction. Deutermann spent twenty-six years in military and government service, as a captain in the Navy and in the Joint Chiefs of Staff as an arms-control specialist. He lives with his wife in North Carolina.

“An epic, eloquent, and stirring tribute to those who served in the Pacific campaign during World War II...a war novel that is both sweeping and intensely personal. It begins with Guadalcanal and Midway and concludes with the largest naval battle in history, Leyte Gulf. Brutal yet poignant, this excellent novel will appeal to fans of David L. Robbins's World War II novels (Broken Jewel; War of the Rats). ” —Library Journal (starred review)

“Pacific Glory is a tale brilliantly told for anyone who loves history or an adventure in the spirit of Patrick O'Brian. Deutermann's eye for capturing the romance, valor, and sacrifice of life at sea is unforgettable. From the first pages, as Deutermann reels you in, you are hooked, drawn into the past and finally delivered back to the future, a journey taken with unforgettable characters.” —Doug Stanton, New York Times bestselling author of Horse Soldiers and In Harm's Way

“Entertaining…those who like pulse-thumping action, cinematic prose, and intrepid heroes will be rewarded.” —Publishers Weekly

“Authentic down to the last riveting detail, Pacific Glory will mesmerize anyone who wants to relive the U.S. Navy's war with Japan – while a mysterious love story about three Annapolis men in love with the same exotic woman winds through the bomb blasts and salvos.” —Thomas Fleming, New York Times bestselling author of Time and Tide