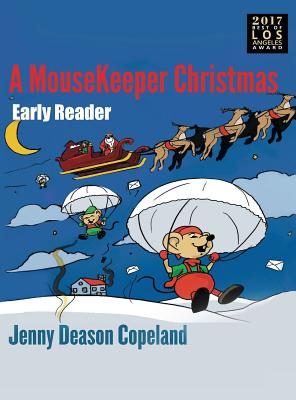 It is a little known fact that the North Pole elves all have at least one pet mouse. The mice originally were used to test the toys but now they seem to break more toys than help. The toy factory was barely able to produce enough toys for last Christmas. Santa has another problem. The "Naughty List" is drying up. That is why the elves are having trouble making enough toys. More and more children are on the "Nice List" each year. To help solve his problem Santa asks the children to make suggestions in a contest. Our heroine, Sara, a six year old brainiac, wins the competition with her idea to send the mice on a vacation. Sara solves Santa's problem using the data gathered by the head elves that shows production soars when the mice take a nap. Santa and Sara put together a plan to send the mice on a vacation from Thanksgiving Eve until Christmas Eve which they hope will save the day. The children who volunteer to help Santa out by babysitting a North Pole pet mouse are called MouseKeepers. Only the children on the "Nice List" can be a MouseKeeper and they must promise to follow the four MouseKeeper rules. One of which is to play hide and seek with their pet mouse at least once a day as that is their favorite game. The story was awarded Best Children's Christmas Book 2017 by Best of Los Angeles. A boxed gift set is also available that comes with a book, a plush mouse toy, a magnetic MouseKeeper pin, parachute, sleep mitten and a letter from Santa to the parents/guardians to help explain all the activities around the MouseKeeper traditions. One page of the book repeats the four MouseKeeper rules which can be taken out of the book and hung up as a reminder to all the MouseKeepers in the family.

The book comes in both Advanced Reader and Early Reader versions as noted in the subtitles. The illustrations are identical.