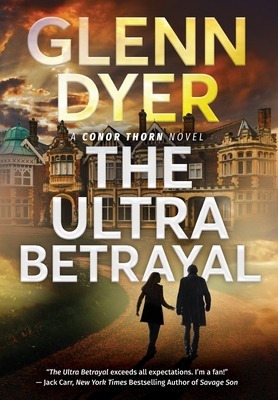 This is book number 2 in the Conor Thorn Novel series.

"Brilliantly researched and filled with fascinating characters from the pages of history, Glenn Dyer once again brings World War II espionage to life in his latest Conor Thorn thriller. The Ultra Betrayal exceeds all expectations. I'm a fan Read it today "

One man's dark deal with the Nazis could bring the Allies to their knees...Autumn, 1942. Rule breaker OSS Agent Conor Thorn is assigned a mission to help the Allied war effort when a key Swedish cryptographer stationed in England goes missing. Thorn is determined to find him before critical information falls into enemy hands, but when his MI6 colleague, Emily Bright vanishes trailing the code-breaker to Stockholm, Thorn is plunged yet again into a sinister Nazi conspiracy.

Suspicious of the cryptographer's wife and racing against time to prevent damaging leaks, Thorn mounts a daring operation. But if the bold intelligence operative's plan fails, he risks compromising Allied tactics and jeopardizing thousands of valiant lives.