A Spy Above the Clouds: A Novel of WW II (Paperback) 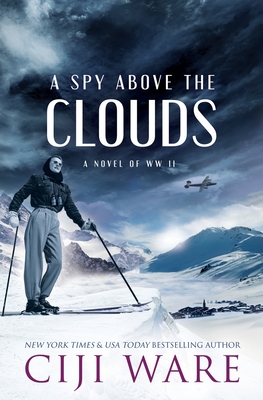 A SPY ABOVE THE CLOUDS - BOOK 2 OF THE "AMERICAN SPY SISTERS" NOVELS INSPIRED BY THE BRAVE U.S. WOMEN SECRET AGENTS WHO FOUGHT THE NAZIS IN WW II.

For the first time in her pampered life, the headstrong American, Constance Vivier-Clarke, has been pressed into doing something useful for a change. Driving an ambulance for the American Hospital in Paris, "Viv" is caught in the crossfire when the Nazis march into Paris. She makes a harrowing getaway over the Pyrenees into neutral Spain and on to London in hopes of finding a role to play in the fight against fascism.

The mysterious Marcel Delonge, a deputy to General de Gaulle, touts Viv's successful clandestine escape to British Intelligence, emphasizing her notoriety as a daredevil skier. The "washout" Olympic hopeful is enlisted as a secret agent and courier-on-skis, ferrying messages and weapons to the Resistance in the enemy-infested French Alps.

Jean-Paul Morand, a young physician, is desperate for someone to guide the downed pilots and Jewish orphans he's hiding in his alpine infirmary to safety in Switzerland. But a question lingers: Is this former playgirl up to the task, or will Viv get herself and her comrades killed-especially when this unlikely member of "Churchill's Angels" flaunts the most important rule of all and falls in love with a fellow spy and saboteur?

With rumors rife of an Allied invasion, someone has betrayed Viv's Mountaineer intelligence network, but who? The Allies' most implausible secret agent still must complete a last, crucial mission-but only if she and the man she loves can survive the final battle in this electrifying WW II romantic thriller based on historical fact.

Praise for A Spy Above the Clouds

Exquisitely researched, A Spy Above the Clouds is a masterfully compelling new novel about women in war. Set against the majestic backdrop of the French Alps during WWII, American Constance Vivier-Clark's life long dreams of becoming an Olympic skier are dashed when war breaks out, canceling her Olympic chances. Ciji Ware creates a passionate, thrilling, and dramatic story of the epic heroism, tragedy, and the ultimate glory of one young woman's path from dilettante to national heroine. Superbly crafted. Recommended for readers of Martha Hall Kelly and Kate Quinn. -Jill Barnett, New York Times Bestselling Author of Sentimental Journey