Danny Yukon and the Secrets of the Amazing Lamp (Paperback) 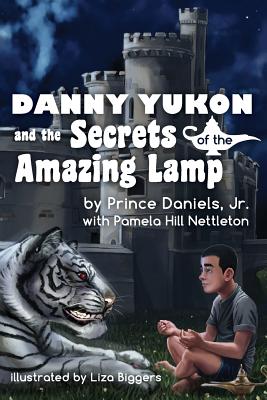 "The lessons provided in this book are a Godsend for parents who need help with getting their kids to focus in school, and even to fall asleep at night. Since learning about Prince and this new book, I have seen firsthand how it has helped a child in my life to accomplish these tasks. I can't say enough good things; I highly recommend it."- Susaye Greene, former member of the Supremes and an Ambassador to the Goodwill Treaty for World Peace.

Danny Yukon and the Secrets of the Amazing Lamp is the story of a young boy who overcomes the loss of his father -a U.S. soldier serving in Afghanistan. As a result of the tragedy, Danny becomes mute. At night, his dreams are haunted by a ferocious tiger. It is not until his uncle gives Danny an amazing lamp-and teaches him how to meditate- that he learns the key to his powers lies within.

Danny Yukon and the Secrets of the Amazing Lamp is the first book in the I'mAGine Series, a collection created by former NFL player and international meditation and fitness expert Prince Daniels, Jr., and written by award-winning author and playwright Pamela Hill Nettleton. I'mAGine is meant to be pronounced "I'm a genie." The series seeks to teach children the benefits and practices of meditation. It speaks to the powers of peace and healing that live within us all.

"Through the I'mAGine Series, Prince Daniels aims to awaken the inner genie in each reader using visualization and other proven methods that enhance a person's focusing ability. Organizations and individuals looking for ways to motivate youth to read and expose them to creating a healthy lifestyle that encompasses physical, mental and spiritual well-being may use this book as a beginning."- Maxine Smith Ed.D., Executive Director, Mayor's Commission for Children, Youth and Families, Charleston, SC.

Prince Daniels, Jr was a two-time all-conference tailback, the fourth-leading rusher in Georgia Tech football history, with 3,300 yards. A two-time Academic All-ACC selection and elected team captain, Daniels was selected for the 2006 Hula Bowl, the college all-star classic. Daniels was drafted by the NFL's Baltimore Ravens in 2006 and released in 2009. More recently he has gained renown as an expert in the fields of fitness, meditation, and holistic health. Pamela Hill Nettleton is a writer, editor, playwright, scriptwriter, librettist, professor and author. Twenty-three of her books are in publication-including a biography of Shakespeare and three series of children's books. More than 300 of her award-winning essays and features have appeared in magazines, newspapers, and websites; her video scripts have won more than 11 national awards, her plays have enjoyed repeated performances. Her doctorate dissertation on post-9/11 television masculinity won the 2010 Kenneth Harwood Outstanding Dissertation Award from the Broadcast Education Association, and she was awarded the 2014 Way Klingler Teaching Enhancement Award at Marquette University. Liza Biggers is a freelance illustrator who grew up in Florida and spent her teens in Ohio. She received her BA at Wright State University in Ohio before moving to New York City. Life experiences and a love of comics has greatly influenced her art. In March 2006, Liza's brother, Ethan, was shot by a sniper in Baghdad and succumbed to his wounds in February 2007 after a long battle. Liza never left his side and served as one of his primary caregivers. This experience led to many projects involving Veterans and their families. Today, Liza still resides in NYC and continues to illustrate