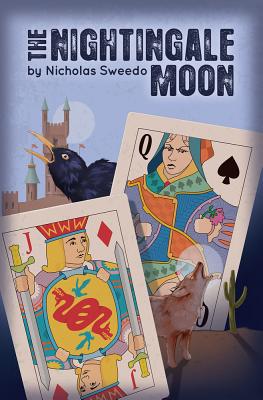 By Nicholas Sweedo
$16.95
Email or call for price.

As the American Civil War is ending, a friendship is beginning. Two boys meet in the Southwest and quickly bond over their love of card games. Nightingale is an orphaned Native American, and Jack is an Easterner searching for his missing older brother. They enter a Hearts tournament on a Mississippi River steamboat and cross paths with several colorful characters including Wild Bill Hickok, Mark Twain, and an evil woman known simply as the Queen. The boys also learn the legend of the Lost Kingdom: a Medieval tale of European royals battling for continental supremacy and searching for a priceless, hidden treasure. As the boys traverse the bayou and lead an escaped slave to safety along an old Underground Railroad route, they discover their own personal connection to the Lost Kingdom legend. Can they foil the Queen’s diabolic plot and stop the crime of the century? And what ancient secrets are written in the deck of cards?

Nicholas Sweedo grew up in Pennsylvania and now lives in Wisconsin. In his spare time, he enjoys history, sports, and shooting the moon.