Shenandoah: Daughter of the Stars: A Civil War Story (Paperback) 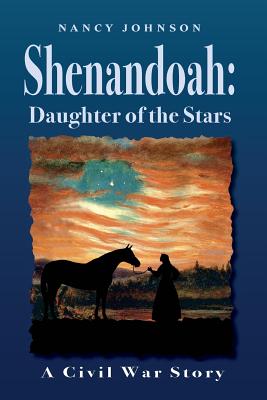 During the turbulent years of the Civil War, three young people struggle to follow their dreams as the war devastates their homeland and their way of life in the Shenandoah Valley of Virginia. Hannah Yeager works hard on her family's farm and teaches young children in a nearby school. She and her parents remain loyal to the Union. Secretly her fourteen-year-old heart thrills to romantic literature. She dreams that someday she will find a true love. When she does, he is a handsome Confederate colonel. The strong female character of Hannah will appeal to girls who often see the Civil War as all about the boys. Hannah is empowered by "The Crazy Man" who lives in nearby caves. She learns from him that she can do what she must do. Hannah's thirteen-year-old brother, Willy, is spirited and headstrong. He rebels against his family's values and seeks adventure by joining an outlaw raider band, terrorizing the Union Army. Charlie Richison is a cadet at the Virginia Military Institute. He dreams of bringing honor to the Confederacy, to his family, and to himself. He joins other VMI cadets to fight against the Union Army in the Battle of New Market. Shenandoah, Daughter of the Stars, presents the beauty of the valley and the devastation brought by the war. It shows the effect of the Reconstruction years which follow the war. It presents real people, General George Armstrong Custer, General "Stonewall" Jackson, General John Breckinridge and shows their effect on the lives of valley residents. Shenandoah examines the perennial dilemmas presented by war.

Maybe because I was born in Hollywood, California, I have always loved the dramatic. With no television as a child, I found drama in books, reading by flashlight under the covers when I was supposed to be asleep. One night when I was ten, my mother wrapped herself in her grandma Mattie's shawl--the same shawl I am wearing in my picture on this page. She sat down with her memory box--black with gold hearts and flowers painted on it. From the box, she drew out a packet of letters tied up in faded ribbon. Unfolding the pages, she began to read letters written by my great, great uncles--two teenage brothers from Rochester, New York, who joined the Union Army in 1862. As she read, my father told me about the battles and the armies and the reason for the war. After graduating from Stanford, I worked, married, and raised three children. While my husband, Bob, was in the Air Force, we traveled to Civil War sites near Northern Virginia--Fredericksburg, Appomattox, Chancellorsville, Gettysburg, and the Shenandoah Valley. I have taught 4th, 5th, and 6th grades in Encinitas, California, where I live, and worked for Kamehameha Schools in Hawaii as a language consultant. Now that I am retired, I enjoy spending time with my four grandchildren. And writing.