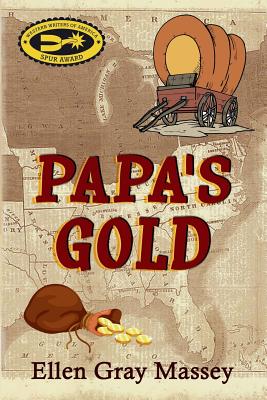 Spur Award for Best Western Juvenile Fiction, 2014, Awarded by the Western Writers of America
George and Sarah Patterson, spirited young twins, set out with their parents to escape from Confederate Tennessee to a new home in Missouri.But when plans go wrong, they find themselves facing mysteries and mishaps, and they must use all their intelligence and bravery to keep their family safe and sound.

"Ellen Gray Massey is a Missouri treasure. She has spent a large part of her life writing about life, teaching about life, speaking about life." Bob Priddy, author, historian, and news editor at MissouriNet radio. Massey has published numerous articles, short stories, essays, a two-act musical play, eleven non-fiction books and sixteen novels. In 1995 she was inducted into the first Writers Hall of Fame. She has received awards from the Missouri Writers Guild and is a three-time Spur Award Finalist from Western Writers of America. Her specialty is the Ozarks and western Missouri, where her family still owns and operates the prairie farm and where there is no longer any evidence of the bloodshed and destruction that occurred before, during, and after the Civil War. From 1973 to 1983 she directed Lebanon, Missouri, high school students who published a magazine, Bittersweet: the Ozark Quarterly, which became a book, Bittersweet Earth. Ellen has given 428 talks across the country - 120 of them for the Missouri Humanities Council. She published Footprints in the Ozarks: A Memoir, Our Robin Is Read, and Skeleton in the Cistern in 2012. Her other young adult books that relate to the Civil War in the Ozarks include Borderland Homecoming, The Burnt District, Brothers Blue and Gray, and Her Enemies Blue and Gray. She lives and writes in the Ozarks.