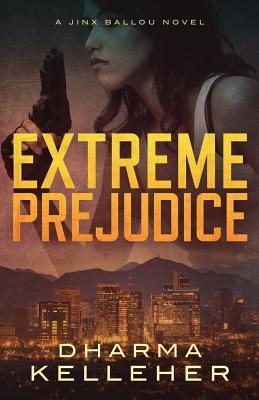 This is book number 2 in the Jinx Ballou series.

To stop a terrorist plot, she must track down the FBI's Most Wanted.

Bounty hunter Jinx Ballou is hot on the heels of a fugitive murderer involved with White Nation, a militant organization stoking the fires of prejudice and violence in Phoenix, Arizona.

But her efforts to bring the man to justice backfires, putting those she loves most in harm's way.

As the city erupts in bigotry and bloodshed, Jinx's world unravels, pushing her to the breaking point and forcing her to choose between seeking justice and saving lives.

Fans of Karin Slaughter, Lisa Gardner, and Sara Paretsky won't want to skip this white-knuckle roller coaster of a novel.

"Dharma Kelleher has created one of the most unique characters in crime fiction. Bounty hunter Jinx Ballou is a creation of contrasting parts. She's tough but compassionate, profane but sensitive, butch but feminine-and there's no dark alley she won't walk down."

"Jinx Ballou is the best thing to happen to crime fiction since V. I. Warshawski."

"Kelleher's intriguing character Jinx Ballou, a bounty hunter who operates in the gritty world of the criminals she hunts, is tough, yet vulnerable."