The Secrets of Afro-Cuban Divination: How to Cast the Diloggún, the Oracle of the Orishas (Paperback) 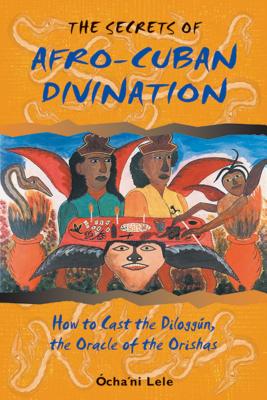 The first book to provide complete, specific instructions on casting the Diloggún, the cowrie-shell oracle of the Orishas.

• Includes a detailed “mojuba” or prayer used to awaken the Orishas (spirit entities) for divination.

• Devotes an entire chapter to each of the twelve basic Odu (random patterns in which the sixteen shells fall), providing ritual mechanics and oracular meanings for all possible castings.

The Afro-Cuban faith, known to outsiders as Santeria and to adherents as Las Reglas de Ocha de Los Lucumi, is not a static religion but a living conduit of energy for connecting the spirit world to our own. It came to the New World with the slave trade where it has evolved in response to the surrounding culture. For adherents of Lucumi, the Diloggún is the most important focus of worship: the sacred shells reveal the forces at play in an adherent's life. These forces are redefined and placated by the Orisha priest, who makes direct contact with the spirit world in an effort to help the adherent evolve.

While many books have been published about Santeria, The Secrets of Afro-Cuban Divination is the first to provide complete information on how to cast the Diloggún, including opening, reading, and closing the oracle, and how to give a comprehensive reading. With a detailed discussion about why each prayer is offered and insight into the metaphysical core of the religion, this book will bring those seeking the wisdom of the Diloggún closer to the living Orishas than they have ever been.

Author of The Secrets of Afro-Cuban Divination, Ócha'ni Lele (1966-2019) was immersed in the underground culture of Orisha worship in 1989. By 1995 he had received several initiations in both Santeria and the Congo faith Palo Mayombe and in 2000 he made Ocha and was crowned a Santeria priest.

". . . a complete resource and guide for anyone wishing to learn how to cast the Diloggun."
— The Chicago Firefly, February 2002

"A richly detailed account of AfroCuban divination. I have had the opportunity to read a number of chapters of this book in its prerelease form and have been thoroughly impressed not only by the detail which the author provides but the extent of his knowledge which this work demonstrates. This is an arcane and highly complex system of divination based on methods and traditions brought to the new world and maintained in Cuba over generations by slaves and their decendants. This title, written by a priest of the Yoruban derived Orisha religion of Cuba commonly known as Santeria, covers not only the fundamentals of how to cast the diloggun or seashell divination, but offers many insights to the finer points of interpretation and application. It is a must for anyone interested in this topic, especially for those unable to avail themselves of the literature currently available in Spanish, Portuguese, or Yoruba on this complex topic."
— Eoghan Ballard, University of Pennsylvania

"Lele's book is the most thorough print version to date of the orally transmitted oracles as they are currently practiced by American babalawos (priests) and santeros (practitioners). Recommended for academic and public libraries."
— Steve Young, Montclair State Univ., N.J., Library Journal

". . . one of the best, clearest, explanations of that divinatory system I have ever been exposed to. If you are very interested in learning about the diloggun system of divination, this book will provide you with an excellent start on the path."
— Mike Gleason, Witchgrove, March 2007