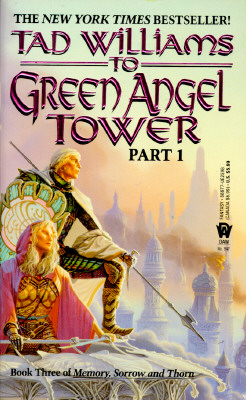 This is book number 3 in the Memory, Sorrow, and Thorn series.

The evil minions of the undead Sithi Storm King are beginning their final preparations for the kingdom-shattering culmination of their dark sorceries, drawing King Elias ever deeper into their nightmarish, spell-spun world.

As the Storm King’s power grows and the boundaries of time begin to blur, the loyal allies of Prince Josua struggle to rally their forces at the Stone of Farewell. There, too, Simon and the surviving members of the League of the Scroll have gathered for a desperate attempt to unravel mysteries from the forgotten past.

For if the League can reclaim these age-old secrets of magic long-buried beneath the dusts of time, they may be able to reveal to Josua and his army the only means of striking down the unslayable foe....

Praise for the Memory, Sorrow, and Thorn series:

"A grand fantasy on a scale approaching Tolkien's Lord of the Rings."—Cincinnati Post

"Sprawling, spellbinding...weaves together a multitude of intricate strands, building to a suitably apocalyptic confrontation between good and evil."—Publishers Weekly

"An epic tale of the struggle of good against evil."—San Francisco Chronicle"The fantasy equivalent of War and Peace."—Locus

"Memory, Sorrow, and Thorn is one of the great fantasy epics of all time. I can’t even remember how many times I’ve read it. It kept me so enthralled, I plowed through the last book in just one sitting! Here be magic, dragons, sprawling battles, thrilling feats of derring-do, ancient mysteries, hidden secrets—all the things a good story needs." —Christopher Paolini, bestselling author of Eragon