The Great Hunt: Book Two of 'The Wheel of Time' (Paperback) 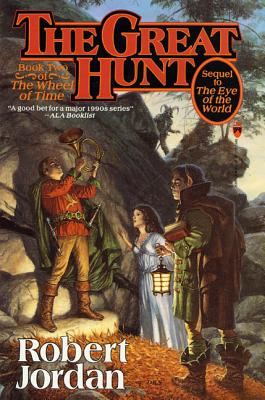 By Robert Jordan, Marsh Jordan
Email or call for price.
Not Available at This Time

This is book number 2 in the Wheel of Time series.

The Wheel of Time turns and ages come and go, leaving memories that become legend. Legend fades to myth, and even myth is long forgotten when the age that gave it birth returns again. For centuries, gleemen have told the tales of The Great Hunt of the Horn. So many tales about each of th Hunters, and so many Hunters to tell of...Now the Horn itself is found: the Horn of Valere long thought only legend, the Horn which will raise the dead heroes of the ages. And it is stolen.

Robert Jordan was born in 1948 in Charleston, South Carolina. He taught himself to read when he was four with the incidental aid of a twelve-years-older brother, and was tackling Mark Twain and Jules Verne by five. He is a graduate of The Citadel, the Military College of South Carolina, with a degree in physics. He served two tours in Vietnam with the U.S. Army; among his decorations are the Distinguished Flying Cross with bronze oak leaf cluster, the Bronze Star with "V" and bronze oak leaf cluster, and two Vietnamese Gallantry Crosses with palm. A history buff, he has also written dance and theater criticism and enjoyed the outdoor sports of hunting, fishing, and sailing, and the indoor sports of poker, chess, pool, and pipe collecting.Robert Jordan began writing in 1977 and went on to write The Wheel of Time(R), one of the most important and best selling series in the history of fantasy publishing with over 14 million copies sold in North America, and countless more sold abroad.Robert Jordan died on September 16, 2007, after a courageous battle with the rare blood disease amyloidosis.

Praise for Book One of The Wheel of Time:

"The Eye of the World is the best of its genre."--The Ottawa Citizen

"A powerful novel of wide and complex scope."--Locus

"This looks very like the next major fantasy epic. It has magic and pacing and detail and human involvement, with a certain subtlety of presentation and a grand central vision. Robert Jordan...is a lot of writer!"--Andre Norton