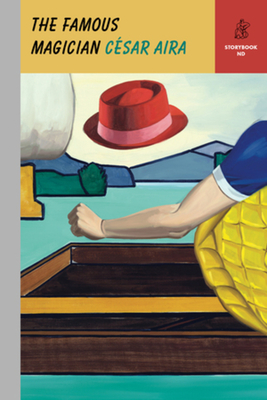 A writer is offered a devil’s bargain: will he give up reading books in exchange for total world domination?

A certain writer ("past sixty, enjoying 'a certain renown'") strolls through the old book market in a Buenos Aires park: "My Sunday walk through the market, repeated over so many years, was part of my general fantasizing about books." Unfortunately, he is suffering from writer's block. However, that proves to be the least of our hero's problems. In the market, he fails to avoid the insufferable boor Ovando—"a complete loser" but a "man supremely full of himself: Conceit was never less justified." And yet, is Ovando a master magician? Can he turn sugar cubes into pure gold? And can our protagonist decline the offer Ovando proposes granting him absolute power if the writer never in his life reads another book? And is his publisher also a great magician? And the writer's wife?

Only César Aira could have cooked up this witch's potion (and only he would plop in phantom Mont Blanc pens as well as fearsome crocodiles from the banks of the Nile)—a brew bubbling over with the question: where does literature end and magic begin?

CÉSAR AIRA was born in Coronel Pringles, Argentina in 1949, and has lived in Buenos Aires since 1967. He taught at the University of Buenos Aires (about Copi and Rimbaud) and at the University of Rosario (Constructivism and Mallarmé), and has translated and edited books from France, England, Italy, Brazil, Spain, Mexico, and Venezuela. Perhaps one of the most prolific writers in Argentina, and certainly one of the most talked about in Latin America, Aira has published more than 100 books to date in Argentina, Mexico, Colombia, Venezuela, Chile, and Spain, which have been translated for France, Great Britain, Italy, Brazil, Portugal, Greece, Austria, Romania, Russia, and the United States. One novel, La prueba, has been made into a feature film, and How I Became a Nun was chosen as one of Argentina’s ten best books. Besides essays and novels Aira writes regularly for the Spanish newspaper El País. In addition to winning the 2021 Formentor Prize, he has received a Guggenheim scholarship, and was shortlisted for the Rómulo Gallegos prize and the Booker International Prize.

Chris Andrews was born in Newcastle, Australia, in 1962. He studied at the University of Melbourne and taught there, in the French program, from 1995 to 2008. He also taught at the University of Western Sydney, where he was a member of the Writing and Society Research Center. As well as translating nine books by Roberto Bolano and ten books (and counting) by César Aira, he also brought the French author Kaouther Adimi’s Our Riches into English for New Directions. Andrews has won the Valle-Inclán Prize and the French-American Foundation Translation Prize for his translations. Additionally, he has published the critical studies Poetry and Cosmogony: Science in the Writing of Queneau and Ponge and Roberto Bolano's Fiction: An Expanding Universe as well as two collections of poems, Cut Lunch and Lime Green Chair, for which he won the Anthony Hecht Poetry Prize.

Aira's
works are like slim cabinets of wonder, full of unlikely juxtapositions. His
unpredictability is masterful.
— Rivka Galchen - Harpers

César Aira is writing a gigantic, headlong, acrobatic fresco of modern life entirely made up of novelettes, novellas, novelitas. In other words, he is a great literary trickster, and also one of the most charming.

A writer’s future hangs in the balance when he is tempted by an “unexpected Mephistopheles” in Aira’s playful, self-reflexive latest...the story’s driving question of choosing a meaningful course for one’s life is timeless.
— Publishers Weekly

Aira’s short books are the literary equivalent of a Périgord black truffle — small, rich delicacies worth savoring and contemplating.
— Polygon

The Famous Magician by Cesar Aira, translated by Chris Andrews, is my favourite of the new books. Aira is the ludicrously prolific Argentinian author of over a hundred short books that invariably come apart while somehow keeping their shape. Rules are established before being merrily violated, ho-hum personal accounts become far-fetched zombie stories, serious literary rumination gives way to comic book pastiche. The method appears to have been working: the results have been books that don’t read like the ones you encounter in life but the kind you might pick up in dreams.