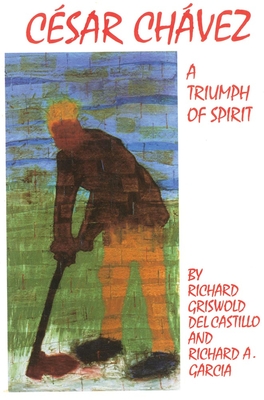 By Richard Griswold del Castillo, Richard a. Garcia
Email or call for price.

When farm worker and labor organizer C sar Ch vez burst upon America's national scene in 1965, U.S. readers and viewers were witnessing the emergence of a new Mexican American, or Chicano, movement. This biography of Ch vez by Richard Griswold del Castillo and Richard A. Garcia is the first to approach Ch vez's life-his courageous acts, his turning points, his many perceived personas-in the context of Chicano and American history. It reveals a shy, quiet man who was launched by events into a maelstrom of campesino strikes, religious fervor, and nonviolent battles for justice. Among his friends and supporters he counted Martin Luther King Jr., Robert Kennedy, Jimmy Carter, and millions across America who rallied to his cause.

In Griswold del Castillo and Garcia's biography, Ch vez's life mirrors major events in Mexican American history: Mexican immigration during the 1920s; forced repatriation in the 1930s; segregation in public schools; Mexican American contributions during World War II; the Zoot Suit Riots in Los Angeles; formation of Mexican American organizations to advance civil and political rights; the Chicano movement of the 1960s and early 1970s; the emergence of a conservative political backlash in the 1980s; and, finally, the new immigration in the 1990s. C sar Ch vez was touched by all these events, and his story is both private and part of a collective experience.

Ultimately the authors see Ch vez's significance as moral. In an age notable for its confusion about-if not lack of moral values, C sar Ch vez stands as proof that America still has people of rare courage and conviction who devote their lives to a righteous cause, to self sacrifice and nonviolent struggle against overwhelming odds. Ch vez consistently respected all ethnic and religious groups, rejected materialism, and, above all, fought for justice. Griswold del Castillo and Garcia's biography tells the inspiring story of a man who lived a simple life and preached a simple guiding dictum: Si Se Puede-Yes, it can be done.