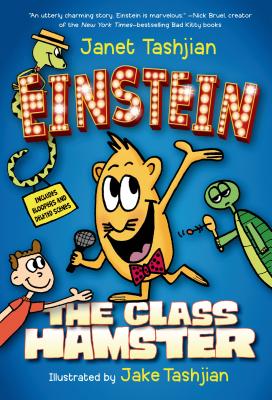 Einstein the class hamster is from a long line of class hamsters. He knows lots of cool facts about science, art, and history—maybe even more than their sleepy teacher, Ms. Moreno. The class has a chance to compete in a trivia game show contest. But how can they get ready for the contest if Ms. Moreno keeps taking naps instead of teaching? More important, how can Einstein help the class prepare for the contest when the only kid who can hear him is Ned?

Janet Tashjian is a middle-grade and young adult novelist who’s been writing books for children for over two decades. Her first novel Tru Confessions was made into a critically acclaimed Disney TV movie starring Clara Bryant and Shia LaBeouf. The Gospel According to Larry series is a cult favorite and Fault Line is taught in many middle and high schools. Her bestselling My Life As a Book series is illustrated by her son, Jake. They also collaborated on the Einstein the Class Hamster series.

Janet collaborated with fellow Macmillan author Laurie Keller on the chapter book series Marty Frye, Private Eye. Janet currently lives in Los Angeles and made her new home city the setting of the Sticker Girl series, which details the adventures of Martina who overcomes being shy with the help of her magical stickers that come to life.

Jake Tashjian is the illustrator for the My Life As a...series, including My Life As a Ninja and My Life As a YouTuber. Jake also created and illustrated the Einstein the Class Hamster series. He collaborates on his novels with his mother, author Janet Tashjian. He has also illustrated several books for the author P.T. Evans.

Fun fact: Jake is a visual learner. When Jake was in elementary school, he used to draw his vocabulary words on index cards. This later became the inspiration for the main character, Derek, in the My Life As series.

In 2016 Jake co-founded Workshop 2.0, a non-profit foundation to train and hire other young artists on the Autism Spectrum.

Jake grew up in Massachusetts and currently lives in Los Angeles. He is an avid surfer and filmmaker.

“Another fun, emotionally resonant read for the Wimpy Kid set and beyond.” —Kirkus Reviews on My Life as a Stuntboy

“A fast-moving plot and relatable protagonist make this stand-alone sequel a good choice for boys who, like Derek, would rather reach for a TV remote or game controller than a book.” —School Library Journal on My Life as a Stuntboy

“Fans of the first will be utterly delighted by this sequel and anxious to see what [Derek] will turn up as next.” —The Bulletin of the Center for Children's Books on My Life as a Stuntboy

“This is a great package for kids, especially those like Derek who don't think they like to read.” —Booklist on My Life as a Stuntboy