Knots on a Counting Rope (Paperback) 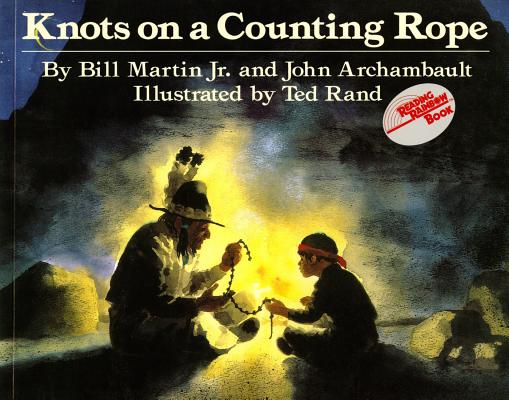 In Knots on a Counting Rope, Bill Martin, Jr. and John Archambault tell a poignant story about a boy’s emerging confidence in facing his blindness in this beautiful children’s picture book illustrated by Ted Rand.

By the warmth of a campfire beneath a starry night sky, a Navajo youth named Boy-Strength-of-Blue-Horses listens to the tale of his birth from his grandfather. Although blind, the boy learns that he has the strength to cope with his condition and meet any challenge that comes his way.

Bill Martin, Jr. (1916-2004) was an elementary-school principal, teacher, writer, and poet. His more than 300 books, among them the bestselling classics Brown Bear, Brown Bear, What Do You See?; Polar Bear, Polar Bear, What Do You Hear?; Panda Bear, Panda Bear, What Do You See?; and Chicka Chicka Boom Boom, are a testament to his ability to speak directly to children. Martin held a doctoral degree in early childhood education. Born in Kansas, he worked as an elementary-school principal in Chicago before moving to New York City, where he worked in publishing developing innovative reading programs for schools. After several years, he devoted himself full-time to writing his children’s books. He lived in New York until 1993, when he moved to Texas. He lived in the east Texas woods, near the town of Commerce, until he passed away in 2004.

John Archambault has collaborated on several successful picture books, including The Ghost-Eye Tree, Barn Dance!, and Knots on a Counting Rope. With Bill Martin Jr. he wrote Listen to the Rain and The Magic Pumpkin.

Ted Rand has collaborated with Bill Martin, Jr. and John Archambault on several successful picture books, including The Ghost-Eye Tree, Barn Dance!, and Knots on a Counting Rope.

“A rich tale of intergenerational love and respect.... It is a moving collaborative effort that reverberates long after the book is closed.” —Publishers Weekly, starred review