March Toward the Thunder (Hardcover) 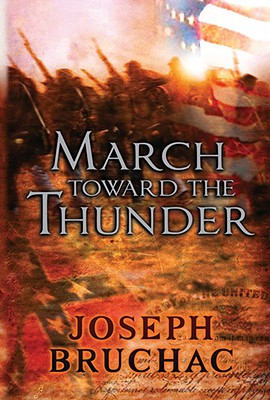 A unique perspective on the Civil War as only Joseph Bruchac could tell it.

Louis Nolette is a fifteen-year-old Abenaki Indian from Canada who is recruited to fight in the northern Irish Brigade in the war between the states. Even though he is too young, and not American or Irish, he finds the promise of good wages and the Union's fight to end slavery persuasive reasons to join up. But war is never what you expect, and as Louis fights his way through battle after battle, he encounters prejudice and acceptance, courage and cowardice, and strong and weak leadership in the most unexpected places.

Master storyteller and acclaimed author Joseph Bruchac tells a Civil War story based on the experiences of his own great grandfather. Chock-full of historical facts and details, this carefully researched book will give readers new insight into some of the untold stories and unsung heroes of the American Civil War.

Joseph Bruchac is a highly acclaimed children's book author, poet, novelist and storyteller, as well as a scholar of Native American culture. Coauthor with Michael Caduto of the bestselling Keepers of the Earth series, Bruchac's poems, articles and stories have appeared in hundreds of publications, from Akwesasne Notes and American Poetry Review to National Geographic and Parabola. He has authored many books for adults and children including Code Talker: A Novel About the Navajo Marines of World War Two, Skeleton Man, and The Heart of a Chief. For more information about Joseph, please visit his website www.josephbruchac.com.