Brave Wolf and the Thunderbird: Tales of the People (Hardcover) 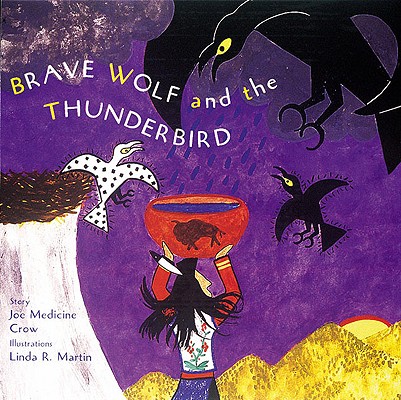 Every spring a great big monster climbs out of the lake and up the cliff to steal the mother Thunderbird's young chicks. This year she is determined to save them, but she needs human help. So she snatches up Brave Wolf while he is out hunting and carries him to her nest, where he comes up with a plan . . .

Brave Wolf and the Thunderbird is based on a story recounted by Joe Medicine Crow in All Roads Are Good: Native Voices on Life and Culture (Smithsonian Institution Press and NMAI). Grandson of a scout who rode with Custer, Mr. Medicine Crow (1913-2016) was a highly respected elder, storyteller, and historian of the Crow people. The first member of his tribe to graduate from college, he earned an M.A. in anthropology. In addition to his calling as a teacher and "keeper of memories," he was a decorated World War II combat veteran and was awarded the Presidential Medal of Freedom by President Barack Obama in 2009.

About the Tales of the People series

Created with the Smithsonian's National Museum of the American Indian (NMAI), Tales of the People is a series of children's books celebrating Native American culture with illustrations and stories by Indian artists and writers. In addition to the tales themselves, each book also offers four pages filled with information and photographs exploring various aspects of Native culture, including a glossary of words in different Indian languages.