The Meanest Doll in the World (The Doll People #2) (Paperback) 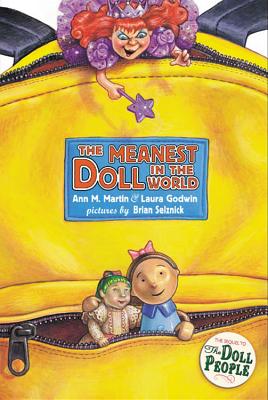 This is book number 2 in the The Doll People series.

Annabelle Doll and Tiffany Funcraft are two dolls who have been best friends since they met in Kate Palmer's house at 26 Wetherby Lane. In this sequel to The Doll People, they hitch a ride in Kate's backpack and find themselves in the biggest adventure of their lives, a day at school! But when an attempt to return home lands them in the wrong house, they're in far deeper trouble than they imagined. Along with a host of new doll friends, they also encounter Mean Mimi, the wickedest doll of all. Mean Mimi is mean-really mean-and she's determined to rule all of Dollkind or else destroy it. Will the world ever be safe for dolls again? In this masterfully plotted sequel, Ann M. Martin and Laura Godwin, with the help of Brian Selznick's ingenious black-and-white illustrations, take the reader on another nonstop adventure from a doll's eye view!

Ann M. Martin is the bestselling author of the momentous Baby-Sitters Club series as well as the Main Street series. Her other acclaimed novels include A Dog’s Life, Belle Teal, Rain Reign, and the Newbery Honor Book A Corner of the Universe. She lives in upstate New York.

Laura Godwin lives and works in New York City but grew up in Alberta, Canada. She has written many well-loved books for children, including Owl Sees Owl, Christmas in the Manger, This Is the Construction Worker, and Oh, Cats!

Brian Selznick is the author and illustrator of the New York Times bestselling Invention of Hugo Cabret, winner of the Caldecott Medal and a National Book Award nominee. He has illustrated many other books for children, including Frindle by Andrew Clements, Amelia and Eleanor Go for a Ride by Pam Muñoz Ryan, and The Dinosaurs of Waterhouse Hawkins by Barbara Kerley, which received a Caldecott Honor. Brian lives in Brooklyn and San Diego.

Praise for The Doll People:

"[Readers] are in for a marvelous treat in this delicious fantasy."  —Kirkus, starred review

"Martin and Godwin inventively spin out their own variation on the perennially popular theme of toys who secretly come to life…Doll lovers may well approach their imaginative play with renewed enthusiasm and a sense of wonder after reading this fun-filled adventure."  —Publishers Weekly, starred review

"It's not easy to write a good book about dolls. Martin and Godwin not only set up a realistic doll world but also provide a credible mystery. The story gets a wonderful boost from Brian Selznick's pencil drawings...he catches every bit of humor."
—Booklist

"A lighthearted touch and a dash of drama make this a satisfying read. Selznick's illustrations are perfectly suited to the innocent charm of the dolls and do much to draw readers into their world."
—School and Library Journal

"'The Doll People' is part of a solid tradition of doll stories. But Ann M. Martin and Laura Godwin have given their amusing novel a decidedly contemporary twist: 19th-century porcelain meets 20th-century plastic."—The New York Times

Praise for The Meanest Doll in the World:

"With its indelible mingling of wit, action, characterization, and art, this stands alone, but will especially thrill expectant fans of the original Doll People."—Kirkus, starred review

"The team behind The Doll People serves up a second helping of fanciful fun."—Publishers Weekly, starred review

"Readers...will hope for many more tales in the series for years to come."—Bookpage

"A thoroughly charming exploration of the fantasy that dolls are secretly alive. In this action-packed sequel, things heat up even further."

"The book's broad humor and action balance with smaller, more personal dramas…Selznick's illustrations, in their wit and profusion, tie it all together in one appealing package."

"This fantasy is destined to be a favorite for years to come."—School Library Journal

Other accolades for the Doll People series: