Crispin: The Cross of Lead (Paperback) 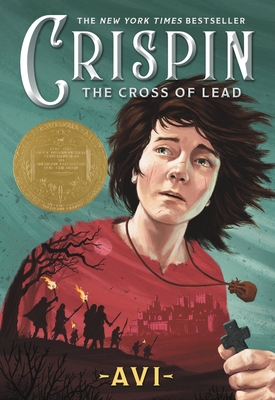 Newbery Medal winner The Cross of Lead is "a page-turner from beginning to end... full of adventure, mystery, and action" (School Library Journal).

Sometimes I ran, sometimes all I could do was walk. All I knew was that if the steward overtook me, I’d not survive for long....

Crispin is a poor thirteen-year-old peasant in medieval England. Accused of a crime he did not commit, he has been declared a "wolf’s head," meaning he may be killed on sight, by anyone. He flees his tiny village with nothing but his mother’s cross of lead.

In the English countryside, Crispin meets a man named Bear, who forces Crispin to become his servant yet encourages him to think for himself. But as Crispin’s enemies draw ever closer, he is pulled right into the fortress of his foes, where he must find a way to save their very lives.

A master of breathtaking plot twists and vivid characters, award-winning author Avi brings the full force of his storytelling powers to the world of medieval England.   "Avi's plot is engineered for maximum thrills, with twists, turns, and treachery aplenty. . . . A page-turner to delight Avi's fans, it will leave readers hoping for a sequel."-Publishers Weekly (starred review) " . . . [T]he book is a page-turner from beginning to end . . . [A] meticulously crafted story, full of adventure, mystery, and action."
-School Library Journal (starred review)
"Historical fiction at its finest."-VOYA

Avi has published more than seventy books. Winner of many awards, including the 2003 Newbery award for Crispin: the Cross of Lead, two Newbery Honors, two Horn Book awards, and an O’Dell award, as well as many children’s choice awards, Avi frequently travels to schools around the country to talk to his readers. Among his most popular books are Crispin: The Cross of Lead, The True Confessions of Charlotte Doyle, Nothing But the Truth, the Poppy books, Midnight Magic, and The Fighting Ground. His most recent books are Ragweed and Poppy, Gold Rush Girl, The End of the World and Beyond (sequel to The Unexpected Life of Oliver Cromwell Pitts), and the somewhat autobiographical Catch You Later, Traitor.  Avi lives in Clark, Colorado, with his wife. He invites you to visit him online at avi-writer.com and on Twitter @avi3writer.