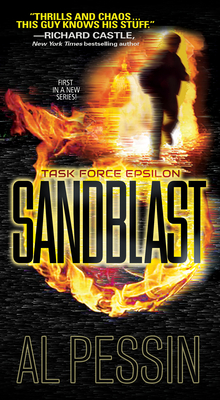 Fans of Vince Flynn and Lee Child rejoice! It’s time for your next action hero….

Lieutenant Faraz Abdallah is willing to do anything for his country, but this time, his ultimate patriot mission will take him into the belly of the beast….and right into the heart of the Taliban….

Written with authentic detail, former foreign correspondent Al Pessin takes the reader on a pulse-pounding adventure, where Faraz learns that in order to defeat the enemy, you have to become your enemy.

The plane carrying the Secretary of Defense is blown out of the sky. The Defense Intelligence Agency greenlights an unprecedented response—Operation: Sandblast.

Pentagon Covert Ops runner Bridget Davenport, must find someone to infiltrate the Taliban, get to the terrorist mastermind, and at all costs stop his plan for an attack more destructive than 9/11. Bridget finds young California-raised Afghan-American Lieutenant Faraz Abdallah. His heritage and military training make him the perfect undercover agent, but no one knows whether he can do the job.

Success depends on Faraz’s ability to fool the Taliban’s top leaders and become a terrorist, while remembering why he’s really there.  Bridget believes in him, but it will take everything she has to keep the president and the top brass from pulling the plug . . .

The author’s experience as a former foreign correspondent that spent more than 15 years overseas paints a vivid and unique thriller that will grip readers till the bitter end!

“Pessin calls on his years in the Pentagon and White House press corps for the keen details that bring this tale to life.”
—T. Jefferson Parker, New York Times bestselling author

“A nail-biter of a thriller.”
—Les Standiford, author of Water to the Angels

“A taut action-thriller that really pulls you in.”
—Henry V. O'Neil, author of The Sim War Series

“This timely, realistic story will be awarded top marks by fans of  Alex Berensen and Vince Flynn.”
—Hank Phillippi Ryan

A foreign correspondent for fifteen years, Al Pessin has covered U.S. troops in Afghanistan and Iraq, dined with anti-Soviet mujahedeen in Pakistan, filed on-scene reports of bus bombings in Jerusalem, interviewed Hamas militants in Gaza, and been a member of the White House and Pentagon press corps. He has also covered democracy movements from Beijing’s Tiananmen Square, Kiev’s Independence Square, and Manila’s EDSA Boulevard. In all, Al spent nearly four decades as a TV/radio broadcaster, correspondent, editor, and manager at the Voice of America. After the Tiananmen Massacre in 1989, the Chinese government expelled Al for “illegal news gathering” and “fomenting counter-revolutionary rebellion.” For his work in China, he received the Communicator of the Year Award from the National Association of Government Communicators and won a Gold Medal at the International Radio Festivals of New York. Al lives in Florida with his wife and their Yellow Lab, Rory. Please visit www.alpessin.com.