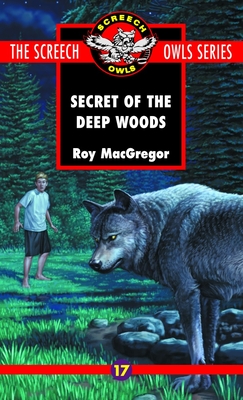 By Roy MacGregor
Email or call for price.
Not Available at This Time

This is book number 17 in the Screech Owls series.

It’s summer, and Rachel Highboy, Jesse’s hockey-playing cousin from James Bay, has come to Tamarack to join the Screech Owls on a week-long canoe trip into the wilds of Algonquin Park.

At the same time, the rookie hero of this year’s Stanley Cup final is in a light plane that goes missing somewhere in the area. It is eerily like the story of Bill Barilko, the legendary Toronto Maple Leafs defenceman who disappeared when his plane crashed deep in the Ontario bush in 1951, just four months after he scored the Stanley-Cup-winning goal!

When some of the team – including a terrified Nish – become separated from the others and find themselves lost in the deep woods, strange things begin to happen. A wolf comes each night to stand by the campfire. A mysterious stranger pays a visit. And a shocking discovery has Rachel and the Screech Owls wondering if they’ll make it out alive!

Roy MacGregor has been involved in hockey all his life. Growing up in Huntsville, Ontario, he competed for several years against a kid named Bobby Orr, who was playing in nearby Parry Sound. He later returned to the game when he and his family settled in Ottawa, where he worked for the Ottawa Citizen and became the Southam National Sports Columnist. He still plays old-timers hockey and has been a minor-hockey coach for more than a decade.

Roy MacGregor is the author of several classics in the literature of hockey. Home Game (written with Ken Dryden) and The Home Team were both number one national bestsellers. He has also written the game’s best-known novel, The Last Season. His other books include Road Games, The Seven A.M. Practice, and A Life in the Bush, a memoir of his father. He has also written books about native leaders and the Ottawa Valley.

Roy MacGregor is now a senior columnist for the National Post. He and his wife, Ellen, live in Kanata, Ontario. They have four children, Kerry, Christine, Jocelyn, and Gordon.

You can talk to Roy MacGregor at www.screechowls.com