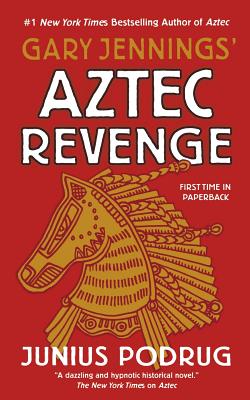 By Gary Jennings, Junius Podrug
$23.99
In Our Warehouse - Expected arrival in 2-5 days

This is book number 6 in the Aztec series.

Juan is a "mestizo," of mixed Spanish and Indio heritage, sure to be doomed to a short, violent life begging on the streets. But Juan has a special gift for handling horses and an ability to defend himself at a time when a man's best friends are his horse and his sword. Only El Mestizo, the half-caste son of the conqueror Cortés, knows that the blood of kings flows in the young beggar.

After killing a man for beating a horse, Juan becomes a highwayman and horse thief before disguising himself as a wealthy caballero. He is wined and dined by the richest and most powerful people in the colony—who don't realize that some of them had once stared down the barrel of Juan's pistola as he took their gold.

Fighting, conniving, and loving in a colorful era of flashing swords and brave hearts, Juan must use all the tricks he learned as a beggar and a bandit to unlock the secret of his own heritage.

Junius Podrug is the author of Frost of Heaven, Presumed Guilty, and The Disaster Survival Bible. He has experienced two major earthquakes, a flash flood, a blizzard of historical significance, a shipboard emergency, and a crazy with a gun. He considers his paranoia to be heightened awareness and habitually checks where the life vests are stored when boarding a ship and where the fire escapes are located before unpacking in a hotel room. He lives in Cape Cod, Massachusetts.

“Aztec Rage is the most extraordinary historical novel to appear in years. It will leave you dazed, shaken, delighted, and moved.” —Douglas Preston, New York Times bestselling author of Tyrannosaur Canyon on Aztec Rage

“Aztec Rage is a major epic, a grand literary canvas of thrills and chills, fire and passion. Even if you think you know Mexico, you will never again look at Mexico the same way. You will look on the Mexican people with new eyes as well, and you will be changed. The final chapter will move you to tears--'I am mejicano!'--will ring in your ears forever.” —Kathleen O'Neal-Gear and Michael Gear, award-winning, USA Today bestselling authors of People of the Moon on Aztec Rage

“Big, bold, and Bawdy, Aztec Rage is a rip-snorting swashbuckler.... It's fiction of the grand tradition.” —Stephen Coonts, New York Times bestselling author of Liars and Thieves on Aztec Rage

“This is a book that will change your ideas about Mexican history and the whole history of the Americas. It resonates with original research and vivid drama.” —Thomas Fleming, New York Times bestselling author of Liberty! The American Revolution on Aztec Rage

“Aztec Rage is an extraordinary novel for the accuracy of its history, the vivid voice of its narrator, its sense of drama and joy and its explication of love and hate, told by a picaresque hero who is as fast with a woman as with his sword. Backdrop for action and adventure is the Mexican Revolution sparked by Father Hidalgo's Grito--the cry of revolt that engulfs Mexico and in time South and Central America and squashes the Spanish empire. Amply anchored in world history and always fun, Aztec Rage is a splendid read.” —David Nevin, New York Times bestselling author of Dream West on Aztec Rage