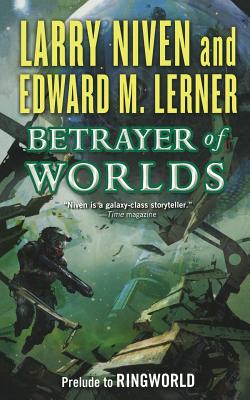 This is book number 4 in the Known Space series.

Fleeing the supernova chain reaction at the galactic core, the cowardly Puppeteers of the Fleet of Worlds have---just barely---survived. They've stumbled from one crisis to the next: The rebellion of their human slaves. The relentless questing of the species of Known Space. The spectacular rise of the starfish-like Gw'oth. The onslaught of the genocidal Pak.

Catastrophe looms again as past crises return---and converge. Who can possibly save the Fleet of Worlds from its greatest peril yet?

Louis Wu? Trapped in the Wunderland civil war, all he wants is to go home---but the only possible escape will plunge him into unknowable danger.

Ol't'ro? The Gw'oth ensemble mind fled across the stars to establish a colony world free from tyranny. But some problems cannot be left behind, and other problems---like the Fleet of Worlds itself---are racing straight at them.

Achilles? Despite past disgrace, the charismatic Puppeteer politician knows he is destined for greatness. He will do anything to seize power---and to take his revenge on everyone who ever stood in his way.

Nessus? The insane Puppeteer scout is out of ideas, out of resources, with only desperation left to guide him.

Their hopes and fears, dreams and ambitions are about to collide. And the winner takes . . . worlds.

Larry Niven is the award-winning author of the Ringworld series, along with many other science fiction masterpieces and fantasy including the Magic Goes Away series. His Beowulf's Children, co-authored with Jerry Pournelle and Steven Barnes, was a New York Times bestseller. He has received the Nebula Award, five Hugos, four Locus Awards, two Ditmars, the Prometheus, and the Robert A. Heinlein Award, among other honors. He lives in Chatsworth, California.

Edward M. Lerner worked in high tech for thirty years, as everything from engineer to senior vice president, for much of that time writing science fiction as a hobby. Since 2004 he has written full-time, and his books run the gamut from technothrillers, like Small Miracles, to traditional SF, like his InterstellarNet series, to, with Larry Niven, the grand space epic Fleet of Worlds series of Ringworld companion novels.   Ed’s short fiction has appeared in anthologies, collections, and many of the usual science fiction magazines. He also writes the occasional nonfiction article, on topics as varied as asteroid deflection, privacy (or lack thereof) in the Internet age, and the role of communications in SF.

“A new Known Space book, particularly one with new information about Puppeteers and their doings behind the scenes of human history, needs recommending within the science fiction community about as much as a new Harry Potter novel does - well, anywhere. But Niven and Lerner have produced a novel that can stand on its own as well as part of the Known Space franchise.” —Locus

“A far-future SF mystery/adventure set two centuries before the discovery of the Ringworld by humans. . . . . Intriguing human and alien characters and lucid scientific detail.” —Library Journal