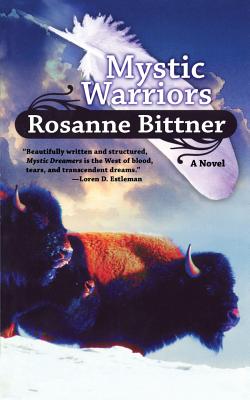 This is book number 3 in the Mystic Dreamers series.

But all is not well. White hunters have stolen the sacred white robe and great misfortune has befallen the Lakota. Settlers continue to invade Lakota territory, backed by vicious cavalry forces that massacre women and children. The Lakota are starving and their anger is growing.
Led by Rising Eagle, a great force of Lakota and other tribes wage war upon the white man. Together they battle to regain the land stolen from them, to protect the precious buffalo the white man wantonly destroys, and to search for the sacred white robe.

Rosanne has won numerous writing awards and has been inducted into romance magazine Affaire de Couer’s Hall of Fame for longevity and endurance in the market and for overall appeal to readers. She has received numerous favorable reviews in Publishers Weekly, and was a finalist for Women Writing the West’s prestigious WILLA award for her novel Where Heaven Begins, set in the Yukon during the gold rush. In 2012 romance magazine Romantic Times named Rosanne a "Legend of Historical Romance."

You can learn more about Rosanne and her latest publications through her web site, her blog, and by visiting her on Facebook and Twitter. Rosanne also contributes to numerous writers’ sites, such as Goodreads, and a number of blog sites.