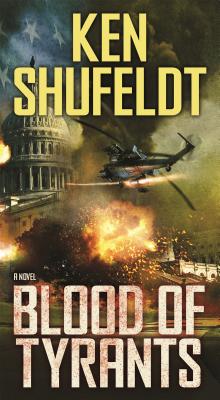 By Ken Shufeldt
Email or call for price.
Not Available at This Time

Ken Shufeldt's Blood of Tyrants is a gripping political thriller exploring the devastating effects that unlimited political funding, if permitted, could produce.

In way over his head, the President refuses to take action, paving the way for the terrorists to use a stolen Pakistani nuke to incinerate almost a million Americans. Fed up with his incompetence, multi-billionaire Walter Jefferson leads several high ranking military leaders and a band of patriots in a bloody coup.

After eliminating President Wilkes and almost everyone on the Presidential succession list, Jefferson proclaims himself Chancellor and begins moving “undesirables” into internment camps. He then orders the military to invade Canada and Mexico in a desperate attempt to wipe out the ISIS contingents hiding there, and to build a buffer zone around the country. There are catastrophic losses on all sides. There’s only one hope for the United States now: the last survivor on the Presidential succession list, the Secretary of State.

Ken Shufeldt was born in Kansas and raised in the West Texas Panhandle. He served in the US Navy for a number of years before leaving to begin a career in computer programming, where he specializes in law enforcement system software and 911 dispatch software. The author of Genesis, Tribulations, and Rebellion, he lives and works in Amarillo, Texas.