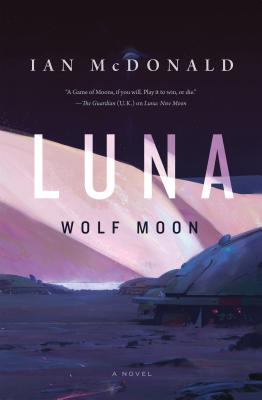 This is book number 2 in the Luna series.

A Dragon is dead.

Corta Helio, one of the five family corporations that rule the Moon, has fallen. Its riches are divided up among its many enemies, its survivors scattered. Eighteen months have passed.

The remaining Helio children, Lucasinho and Luna, are under the protection of the powerful Asamoahs, while Robson, still reeling from witnessing his parent’s violent deaths, is now a ward--virtually a hostage--of Mackenzie Metals. And the last appointed heir, Lucas, has vanished from the surface of the moon.

Only Lady Sun, dowager of Taiyang, suspects that Lucas Corta is not dead, and more to the point—that he is still a major player in the game. After all, Lucas always was the Schemer, and even in death, he would go to any lengths to take back everything and build a new Corta Helio, more powerful than before. But Corta Helio needs allies, and to find them, the fleeing son undertakes an audacious, impossible journey--to Earth.

In an unstable lunar environment, the shifting loyalties and political machinations of each family reach the zenith of their most fertile plots as outright war erupts.

Ian McDonald was born in 1960 in Manchester, England, to an Irish mother and a Scottish father. He moved with his family to Northern Ireland in 1965. He has won the Locus Award, the British Science Fiction Association Award, and the John W. Campbell Memorial Award. His first novel, Desolation Road, was published in 1988. Other works include King of Morning, Queen of Day (winner of the Philip K. Dick Award), River of Gods, The Dervish House, the graphic novel Kling Klang Klatch, and many more. He now lives in Belfast.

"Spare, simple, elegant when he needs to be...deep and meaty when he wants to be...[McDonald] does his work like an artisan pulling a sculpture from stone." —NPR

"Each of McDonald’s viewpoint characters is made human in fascinating and occasionally disturbing detail, and the solar system of the 22nd century is wonderfully delineated." —Publishers Weekly, starred review

"The fights and vengeance that follow are more vicious and intricate than anything in Game of Thrones, full of great acts of self-sacrifice and viciousness alike, brave cavalry charges and last stands, cowardice and avarice." —Boing Boing

"For all the enjoyable intrigue he concocts, McDonald never lets us forget that the Moon is a frontier that basically just wants to kill us." —Chicago Tribune

“McDonald's never written a bad novel, but [Luna: New Moon] is a great one.” —Cory Doctorow

"With an action narrative driving this political commentary, Luna is actually a fantastically fun read as well as an important one. " —Los Angeles Review of Books

"An engaging thriller... McDonald's portrait of a cutthroat society trying to survive in the deadliest of environments also make it one of the strongest science fiction novels of the year." —The Chicago Tribune

"It’s a great scenario, lovingly detailed, and curiously attractive despite its current of unforgiving violence." —The Wall Street Journal

"The best moon novel I’ve seen in many years. . . McDon­ald’s novel has some formidable SF stingers not far beneath its densely textured surface." —Locus

"The story is innovative and fresh...has a feel of The Godfather meets A Song of Ice and Fire meets Ender’s Game." —Portland Book Review