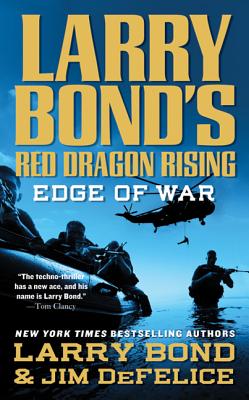 By Larry Bond, Jim DeFelice
Email or call for price.
Not Available at This Time

This is book number 2 in the Red Dragon Rising series.

CIA officer Mara Duncan faces her most grueling assignment yet: get scientist Josh MacArthur and a seven-year-old witness to Chinese atrocities in Vietnam out of the country safely. With a relentless Chinese monk turned commando and the entire Chinese secret service in Vietnam at their back, it's not going to be easy. Not to mention the trigger-happy SEALs who put Mara and company on China and Vietnam's wanted list.

Meanwhile, U.S. Army Advisor Zeus Murphy is working to prevent the Chinese from landing on Vietnam's coast. He concocts a daring mission into the heart of the Chinese fleet, an operation that will go down in the annals of history either as one of the most daring triumphs of all time or one of the most foolish suicide raids ever attempted. Or maybe both.

“Is there anyone who can write this kind of book better than Larry Bond? I don't think so. He is the master of the techno-thriller. More than that, he always gives me something to think about. I may be repeating myself when I say he's done it again, but folks, he's done it again.” —William Martin, New York Times bestselling author of City of Dreams

“The techno-thriller has a new ace and his name is Larry Bond.” —Tom Clancy, bestselling author of Without Remorse


“Action on every page. Maybe in every paragraph.” —Kirkus Reviews on Larry Bond's First Team

“No writer living can produce the depth of political intrigue like Larry Bond.” —Clive Cussler