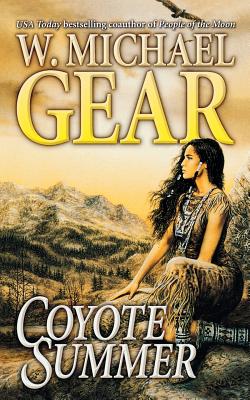 This is book number 2 in the Man From Boston series.

Against the wild grandeur of the Rocky mountains and a richly woven tapestry of Indian cultures--Sioux, Mandan, Crow, Shoshoni--Coyote Summer unfolds into an unforgettable tale of love and reconciliation, destiny, and the indomitable spirit.

No two people could be more different: Heals Like A Willow, a beautiful young Shoshoni medicine woman, and Richard Hamilton, a Harvard philosophy student new to the frontier. Though they come from worlds apart, hindered by vastly different cultures, their souls have met and will not be denied.

But Willow has ties to the Spirit world and a responsibility to her people. In visions she has seen the coming White Storm brewing in the East--the endless stream of settlers overrunning the land, pouring ever westward. She must leave the trading posts, the river, and the company of white men. Even if it means leaving behind the one who has taken her heart.

Armed only with his philosophy, meaningless in the harsh reality of the Rockies, Richard sets out after her. Facing the endless expanse of mountains and snow, a new understanding dawns on Richard--that his desperate search for love and illumination may bear the ultimate price.

“The sequel to The Morning River and a dandy book on its own merits. In fact, Coyote Summer may be the better story of the two. Certainly, it doesn't lack for excitement....Gear succeeds in creating something more than a mere historical novel.” —Roundup magazine