The Eye of the World: The Graphic Novel, Volume Three (Wheel of Time Other #3) (Hardcover) 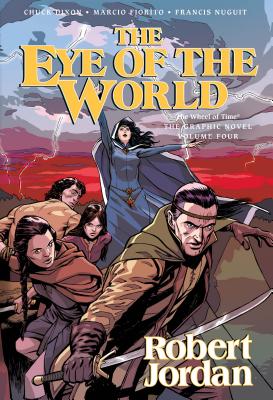 With the full permission and cooperation of the Jordan estate, adapted by well-known comics writer Chuck Dixon, The Eye of the World: The Graphic Novel has been hailed as an exciting interpretation of Robert Jordan's classic fantasy novel. It features brilliant interior art by Marcio Fiorito and Francis Nuguit, and stunning covers by Jeremy Saliba and Seamus Gallagher. It collects issues thirteen to eighteen of the comic book.

Rand; his friends Mat, Perrin, and Egwene; the Aes Sedai Moiraine and her Warder, Lan Mandragoran; Thom the gleeman and Nynaeve, the village Wisdom, split into three groups while trying to escape the ancient, dead city of Shadar Logoth, where they are pursued by the deadly Mashadar. A disastrous river crossing leaves Perrin and Egwene on their own—until they meet a mysterious stranger who claims that he and Perrin share a remarkable ability. Meanwhile, Rand, Mat, pose as Thom's apprentices as they sail downriver on a cargo ship.

Chuck Dixon is a comic book writer best known for his long runs on several Batman titles in the 1990’s for DC Comics. Throughout his prolific career, Dixon has written for Evangeline (Comico Comics), The Savage Sword of Conan, The Punisher War Journal (Marvel Comics), Robin, Nightwing, Detective Comics (DC Comics), and Simpsons Comics (Bongo Comics). Dixon worked closely with Robert Jordan on the graphic adaptation of New Spring and with Jordan’s estate on The Eye of the World graphic novel.

MARCIO FIORITO has illustrated for Anne Elizabeth's Pulse of Power and for the graphic novel of Robert Jordan’s Wheel of Time, among other works. He was born in Brazil.

FRANCIS NUGUIT is a comic-book illustrator from the Philippines. He was an illustrator for the graphic novel of The Eye of the World by Robert Jordan.

“All of the dialogue is straight out of the book. Dixon is able to make the story flow on the page, without making it feel too dry or wordy. All the characters look like how I might imagine them. Fans of the books will be reminded of the things they enjoyed about the series in the first place.” —Geeks of Doom

“I loved it. I really loved it. This is not just a beautiful visual aid to the story, but a means of being able to enjoy the story in a new way. I eagerly look forward to the next volume.” —Richard Fife on Dragonmount.com