Fate of Worlds: Return from the Ringworld (Known Space #5) (Paperback) 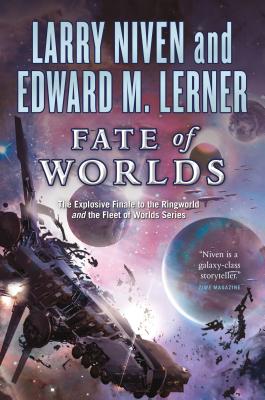 This is book number 5 in the Known Space series.

For decades, the spacefaring species of Known Space have battled over the largest artifact—and grandest prize—in the galaxy: the all-but-limitless resources and technology of the Ringworld. But without warning the Ringworld has vanished, leaving behind three rival war fleets.

Something must justify the blood and treasure that have been spent. If the fallen civilization of the Ringworld can no longer be despoiled of its secrets, the Puppeteers will be forced to surrender theirs. Everyone knows that the Puppeteers are cowards.

But the crises converging upon the trillion Puppeteers of the Fleet of Worlds go far beyond even the onrushing armadas:

Adventurer Louis Wu and the exiled Puppeteer known only as Hindmost, marooned together for more than a decade, escaped from the Ringworld before it disappeared. And throughout those years, as he studied Ringworld technology, Hindmost has plotted to reclaim his power …

Ol't'ro, the Gw'oth ensemble mind—and the Fleet of World's unsuspected puppet master for a century—is deviously brilliant. And, increasingly unbalanced …

Proteus, the artificial intelligence on which—in desperation—the Puppeteers rely to manage their defenses, is outgrowing its programming. And the supposed constraints on its initiative …

Sigmund Ausfaller, paranoid and disgraced hero of the lost human colony of New Terra, knows that something threatens his adopted home world. And that it must be stopped …

Achilles, the megalomaniac Puppeteer, twice banished—and twice rehabilitated—sees the Fleet of World's existential crisis as a new opportunity to reclaim supreme power. Whatever the risks …

One way or another, the fabled race of Puppeteers may have come to the end of their days in Fate of Worlds, the final installment to Larry Niven and Edward M. Lerner's Fleet of Worlds series.

Larry Niven is the award-winning author of the Ringworld series, along with many other science fiction masterpieces and fantasy including the Magic Goes Away series. His Beowulf's Children, co-authored with Jerry Pournelle and Steven Barnes, was a New York Times bestseller. He has received the Nebula Award, five Hugos, four Locus Awards, two Ditmars, the Prometheus, and the Robert A. Heinlein Award, among other honors. He lives in Chatsworth, California.

Edward M. Lerner worked in high tech for thirty years, as everything from engineer to senior vice president, for much of that time writing science fiction as a hobby. Since 2004 he has written full-time, and his books run the gamut from technothrillers, like Small Miracles, to traditional SF, like his InterstellarNet series, to, with Larry Niven, the grand space epic Fleet of Worlds series of Ringworld companion novels.   Ed’s short fiction has appeared in anthologies, collections, and many of the usual science fiction magazines. He also writes the occasional nonfiction article, on topics as varied as asteroid deflection, privacy (or lack thereof) in the Internet age, and the role of communications in SF.

“Exceptional freshness and suspense...full of startling revelations about human and puppeteer politics.” —Booklist