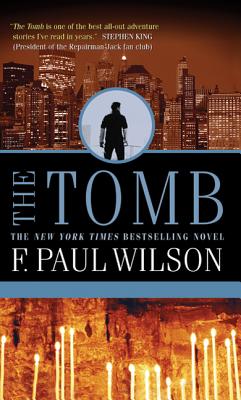 This is book number 2 in the Adversary Cycle/Repairman Jack series.

Much to the chagrin of his girlfriend, Gia, Repairman Jack doesn't deal with appliances. He fixes situations—situations that too often land him in deadly danger. His latest fix is finding a stolen necklace which, unknown to him, is more than a simple piece of jewelry.

Some might say it's cursed, others might call it blessed. The quest leads Jack to a rusty freighter on Manhattan's West Side docks. What he finds in its hold threatens his sanity and the city around him. But worst of all, it threatens Gia's daughter Vicky, the last surviving member of a bloodline marked for extinction.

“The Tomb is one of the best all-out adventure stories I've read in years.” —Stephen King (President of the Repairman Jack fan club)