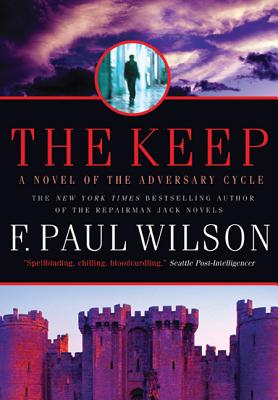 This is book number 1 in the Adversary Cycle/Repairman Jack series.

The Keep is the first book in the Adversary Cycle from bestselling author F. Paul Wilson

"Something is murdering my men."

Thus reads the message received from a Nazi commander stationed in a small castle high in the remote Transylvanian Alps. Invisible and silent, the enemy selects one victim per night, leaving the bloodless and mutilated corpses behind to terrify its future victims.

When an elite SS extermination squad is dispatched to solve the problem, the men find something that's both powerful and terrifying. Panicked, the Nazis bring in a local expert on folklore--who just happens to be Jewish--to shed some light on the mysterious happenings. And unbeknownst to anyone, there is another visitor on his way--a man who awoke from a nightmare and immediately set out to meet his destiny.

The battle has begun: On one side, the ultimate evil created by man, and on the other...the unthinkable, unstoppable, unknowing terror that man has inevitably awakened.

“One of the few really satisfying horror novels of the year...it has true fear in it.” —Peter Straub