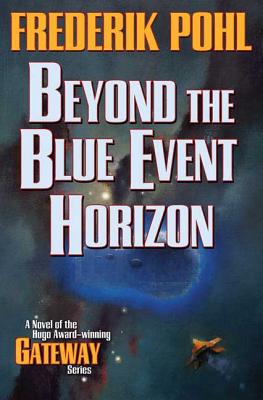 Frederik Pohl was on a streak when this Hugo Award–finalist novel was published in 1980. Now back in print after an absence of nearly a decade, this unique science fiction novel is as fresh and entertaining as ever.

The story begins when the hero of Gateway finances an expedition to a distant alien spaceship that may end famine forever. On the ship, the explorers find a human boy, and evidence that reveals a powerful alien civilization is thriving on a transport ship headed right for Earth….

Frederik Pohl (1919-2013) was one of science fiction's most important authors. Among his many novels are Gateway, which won the John W. Campbell Memorial Award, the Hugo Award, the Locus SF Award, and the Nebula Award, Beyond the Blue Event Horizon, which was a finalist for the Hugo and Nebula Awards, and Jem, which won the 1980 National Book Award in Science Fiction. He also collaborated on classic science fiction novels including The Space Merchants with Cyril M. Kornbluth. Pohl was an award-winning editor of Galaxy and If, a book editor at Bantam, and served as president of the Science Fiction Writers of America. He was named a Grand Master of Science Fiction by SFWA in 1993, and was inducted into the Science Fiction and Fantasy Hall of Fame.

“Certainly very few books have ever held my attention in such an iron grip right up until the last paragraph, built so irresistibly to such a satisfying series of blockbuster punch lines, left me so breathless with admiration, achieved such truly cosmic scope.” —Analog

“The kind of mind-opening conceptualization that makes the universe seem very vast and beautiful indeed. In short, this is a book that fulfills SF's ability to entertain intelligently.” —The Chicago Sun-Times

“Peerless in his own generation, with few equals of any age. One of the fifty most influential people in the Chicago book world. ” —News City (Chicago)

“Gateway is one of those rare gems: a deeply human story set against the wonders and beauty of the infinite starry universe. Fred Pohl, Old Master that he is, has broken new ground for the science-fiction novel.” —Ben Bova, Editor, Analog on Gateway

“ . . . an engrossing story, a different but worthy successor to Gateway.” —Publishers Weekly on Gateway