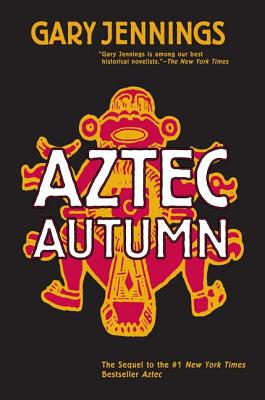 This is book number 2 in the Aztec series.

Gary Jennings's Aztec Autumn recreates a forgotten chapter of history in all its splendor and unforgettable passion.

The magnificent Aztec empire has fallen beneath the brutal heal of the Spaniards. But one proud Aztec, Tenamaxtli, refuses to bow to his despised conquerors. He dreams of restoring the lost glory of the Aztec empire, and recruits an army of rebels to mount an insurrection against the seemingly invincible power of mighty Spain.

Tenamaxtli's courageous quest takes us through high adventure, passionate women, unlikely allies, bright hope, bitter tragedy, and the essence of 16th century Mexico. This incredible rebellion has been little remembered, perhaps because it shed no glory on the men who would write the history book, but on its outcome depended the future of all North America.

“Like all good historical writers, Jennings demonstrates the talent to interpret history, not just relate it. The fact that he has taken a footnote in Aztec history and written almost four hundred pages about it is a testament to his imagination, ability, and knowledge of the subject matter.” —The Tampa Tribune & Times

“If you can't make it to the latest summer blockbuster film, Aztec Autumn is the book equivalent.” —San Francisco Chronicle

“Jennings' ability to marshal the results of considerable research into a smoothly flowing narrative is remarkable; here he gives appreciators of historical fiction something to relish.” —Booklist