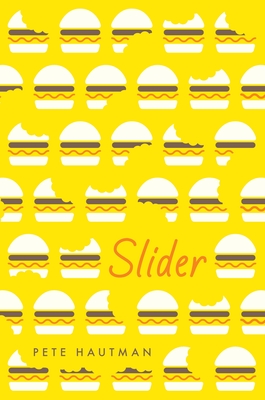 David can eat an entire sixteen-inch pepperoni pizza in four minutes and thirty-six seconds. Not bad. But he knows he can do better. In fact, he’ll have to do better: he’s going to compete in the Super Pigorino Bowl, the world’s greatest pizza-eating contest, and he has to win it, because he borrowed his mom’s credit card and accidentally spent $2,000 on it. So he really needs that prize money. Like, yesterday. As if training to be a competitive eater weren’t enough, he’s also got to keep an eye on his little brother, Mal (who, if the family believed in labels, would be labeled autistic, but they don’t, so they just label him Mal). And don’t even get started on the new weirdness going on between his two best friends, Cyn and HeyMan. Master talent Pete Hautman has cooked up a rich narrative shot through with equal parts humor and tenderness, and the result is a middle-grade novel too delicious to put down.

Pete Hautman is the author of many books for young adults and adults, including the National Book Award–winning Godless, the Klaatu Diskos trilogy, and Eden West. Pete Hautman divides his time between Wisconsin and Minnesota.

Jack-of-all-genres Hautman turns to the mouthwatering, madcap world of competitive eating...With crystalline prose, delectable detail, rip-roaring humor, and larger-than-life characters, Hautman gracefully examines what it means to be a friend, a family member, and, through it all, a kid trying to do the right thing. Readers will race to devour it, but like Papa Pigorino’s colossal BDT pizzas, this infectious tale is a thing to be savored.
—Booklist (starred review)

This novel is laugh-out-loud funny and genuinely sweet. Though the premise of scarfing down pizzas seems silly, this is ultimately a meaningful book with insight into having a sibling with special needs and the general ups and downs that come with being a teenager. A fantastically funny, relatable book that will be an easy sell and a rewarding read for most middle graders.
—School Library Journal (starred review)

Hautman (Eden West) is both funny and uplifting in this good-natured story of incoming high school freshman David Miller, whose chief talent is the ability to eat an entire pizza in under five minutes...Hautman offers lots of great takeaways about loyalty, friendship, and perseverance, wrapped in a wholly enjoyable story about a kid who, in the end, just loves to eat pizza.
—Publishers Weekly (starred review)

The first-person narrative explores the two brothers’ relationship in a nuanced way...David becomes more attuned to Mal’s perspective and ways of communicating.
—The Horn Book

...the book could be used in group or classroom reads as it could foster good discussion questions.
—School Library Connection

Family relationships and buddy support are authentically drawn, and the bones of the plot are sturdy...the resolution is satisfying and readers will come away thoroughly entertained. Even if they take a pass on pizza and burgers for a couple of days.
—Bulletin of the Center for Children's Books

Winning views of a family pulling together, of young people stumbling into adolescence, and of an entertaining if controversial pursuit, "reverse-eating events" and all.
—Kirkus Reviews

Only an author as talented as Hautman could juxtapose eating contests with caring for an autistic 10-year-old.
—Pioneer Press

Let’s turn now to the year’s two most refreshing narrators, David Alan Miller and Shane Burcaw. David is an eighth-grader with an amazing talent for competitive eating and the fictional hero of Pete Hautman’s heartfelt middle-grade novel “Slider” (Candlewick)…David isn’t a character you meet every day.
—The Wall Street Journal