The Queen of the Dead (Paperback) 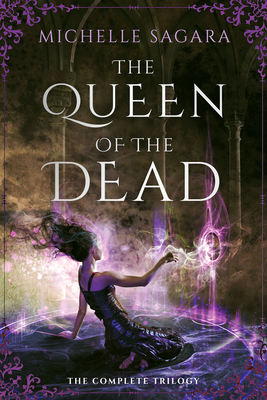 Now available in omnibus format, the Queen of the Dead trilogy tells the gripping tale of a teenage girl who discovers her powers of necromancy after the death of her boyfriend.

It began in the graveyard...

Ever since her boyfriend Nathan had died in a tragic accident, Emma had been coming to the graveyard at night. During the day she went through the motions at her prep school, in class, with her friends, but that's all it was. For Emma, life had stopped with Nathan's death. But tonight was different. Tonight Emma and her dog were not alone in the cemetery. There were two others there--Eric, who had just started at her school, and an ancient woman who looked as though she were made of rags. And when they saw Emma there, the old woman reached out to her with a grip as chilling as death....

Emma was not quite like other girls. It was true that other girls had experienced grief. Other girls had also lost their fathers, or had their boyfriends die in senseless accidents. But though she hadn't known it till that night in the graveyard, unlike those other girls, she could see, touch, and speak with the dead. Follow this gripping saga as Emma must learn to navigate her powers and the responsibilities that accompany them.

Michelle Sagara has published numerous short stories and fantasy novels, including the successful Cast (The Chronicles of Elantra) novels for Luna. She was a two-time nominee for the John W. Campbell Award. She works part-time at BAKKA Books, one of Toronto's larger bookstores, and writes reviews for The Magazine of Fantasy & Science Fiction.

Praise for the Queen of the Dead series

“It's rare to find a book as smart and sweet as this one.” —Sarah Rees Brennan, author of The Demon's Lexicon

“In Touch, Sagara paints an eerie and original picture of the afterlife.... Beautifully written, with characters so real—even the dead ones—they could be any of us, Touch is an exceptional addition to a powerful series. Don’t miss this.” —Julie Czerneda, author of A Turn of Light

"Brilliant storyteller Sagara heads in a new direction with her Queen of the Dead series....There is a haunting beauty to this story of love, loss, and a teenager’s determination to do the right thing. Do not miss out!" —RT Reviews (top pick!)

“For all that this is a novel deeply concerned with loyalty, with healthy friendships, and with human decency, it doesn’t hesitate to wrap cold fingers around your spine and yank when the moment calls for it. Sagara’s characters are believable, flawed, and very human, and make for compelling reading.” —Tor.com