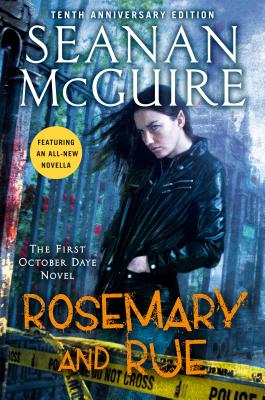 This is book number 1 in the October Daye series.

Celebrating ten years of the Hugo-nominated and New York Times-bestselling October Daye urban fantasy series comes a new hardcover anniversary edition of the book that started it all, with a new bonus novella.

The world of Faerie never disappeared; it merely went into hiding, continuing to exist parallel to our own. Secrecy is the key to Faerie's survival—but no secret can be kept forever, and when the fae and mortal worlds collide, changelings are born.

Outsiders from birth, these half-human, half-fae children spend their lives fighting for the respect of their immortal relations. Or, in the case of October "Toby" Daye, rejecting it completely. After getting burned by both sides of her heritage, Toby has denied the fae world, retreating into a “normal” life. Unfortunately for her, Faerie has other ideas...

The murder of Countess Evening Winterrose, one of the secret regents of the San Francisco Bay Area, pulls Toby back into the fae world. Unable to resist Evening’s dying curse, Toby must resume her former position as knight errant to the Duke of Shadowed Hills and begin renewing old alliances that may prove her only hope of solving the mystery...before the curse catches up with her.

This edition features an all-new October Daye novella, Strangers in Court. Toby knew what she was doing when she threw her lot in with Devin, but when the time comes to get out, she has a little less of a clue. In order to win her freedom, she must do something to impress the local nobility—and the collapse of the Queen's knowe would seem to be exactly the opportunity she's been waiting for to prove herself!  Set well before the events of Rosemary and Rue, this is a rare look at Toby's past as a changeling street rat, before she discovered her destiny as a Hero of the Realm.

Praise for the October Daye series

"Everything you'd ever need in an urban fantasy. It's a smart story, cleanly told that allows both humor and heartbreak to take their turn on stage." —Tanya Huff, author of An Ancient Peace

"Rosemary and Rue is one of the most successful blends of mystery and fantasy I've ever read—like Raymond Chandler by way of Pamela Dean." —Tim Pratt, author of Dead Reign

"McGuire knows her fairy lore, bringing the wonder and the danger of the fair folk to the streets of San Francisco so vividly you can smell the rose goblins." —Jim C. Hines, author of Libriomancer

"An incredible mix of action, mystery, fairy, urban fantasy, and just a smidgen of romance artfully woven into a story impossible to put down.” —Sacramento Book Review