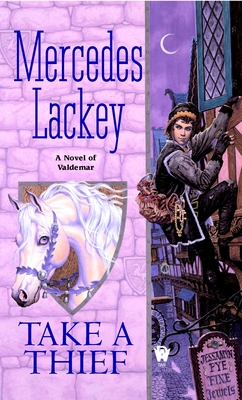 By Mercedes Lackey
$8.99
In Our Warehouse - Expected arrival in 2-5 days

Mercedes Lackey's triumphant return to the best-selling world of Valdemar, Take a Thief reveals the untold story of Skif--a popular character from Lackey's first published novel, Arrows of the Queen.

Skif was an orphan who would have died from malnutrition and exposure if he had never met Deke the pickpocket.  By the time he was twelve, Skif was an accomplished cat burglar.  But it wasn't until he decided to steal a finely tacked-out white horse, which was, oddly enough, standing unattended in the street, that this young thief discovered that the tables could turn on him--and that he himself could be stolen!

Mercedes Lackey is a full-time writer and has published numerous novels and works of short fiction, including the best-selling Heralds Of Valdemar series. She is also a professional lyricist and a licensed wild bird rehabilitator. She lives in Oklahoma with her husband, artist Larry Dixon, and their flock of parrots. She can be found at mercedeslackey.com.